Known for her work on the hit TV show Dexter, this Aussie actress certainly studied Shakespeare in acting school, but definitely not how to suture wounds. Find out about her nerve-wracking experience that involved stitching prosthetics and nearly drawing blood from Aaron Eckhart’s flesh. 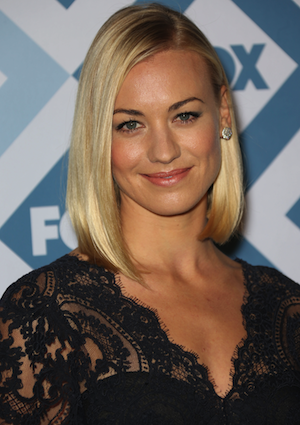 Mary Shelley had originally given two titles to her frightening tale about a mad scientist’s successful attempt to bring a corpse back to life: Frankenstein or The Modern Prometheus. Frankenstein is clearly the one that stuck.

Frankenweenie: A boy and his dead dog >>

Now, nearly 200 years after the 18-year-old Shelley penned this dark work of science fiction, Hollywood is still exploring its themes at the cinema. We sat down with Yvonne Strahovski, who plays Dr. Terra Wade, an electrophysiologist, to find out why this story still fascinates audiences.

“For us in this movie, it’s about choices that one makes and how they shape one’s character and who they are. It’s also about a monster discovering his potential to be a good being in this world. When you look past the big action scenes and the epic fight scenes, there is that heart to this particular movie.”

Though the movie was filmed in her native Australia, nearly all the scenes were shot at night to create a dark, dystopian look. We asked Strahovski how she dealt with her grueling schedule.

“We did a lot of nighttime shoots, but it’s something that I’m used to coming from television. I had wrapped Chuck right before we did I, Frankenstein, and we did a lot of night shoots and you do end up getting used to it. One thing I’ve learned over the years is: do not ask what time it is until someone calls ‘Wrap.'” 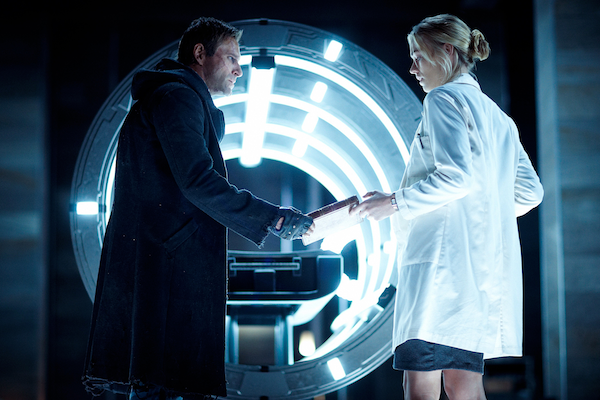 Many of Strahovski’s scenes were with British actor Bill Nighy (Best Exotic Marigold Hotel), who plays the maniacal Naberius. She told us that Nighy was, “Quite the entertainer on set, he’s very charming and funny, he likes to engage and talk. He’d be telling a funny story and then dive right into his demon character. It was funny to watch.”

But probably the most memorable scene in I, Frankenstein is when Aaron Eckhart (Adam Frankenstein), takes off his shirt and lets Strahovski stitch up his wounds. 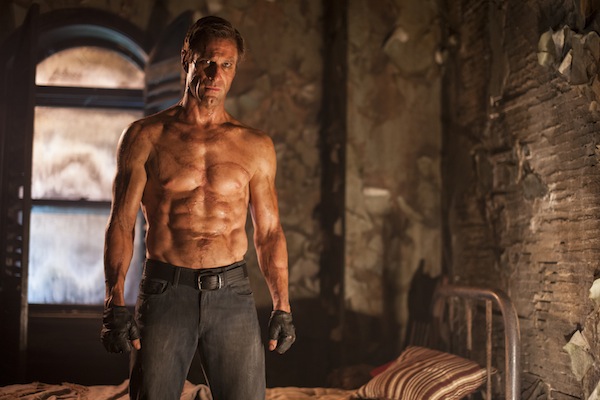 “There was a lot going on in that scene,” she said. No, kidding, Eckhart’s six-pack nearly stole the show! Strahovski told us that it was one of the first scenes she shot and it was a bit stressful as she was still feeling out her character. But what really made the scene tricky? She actually had to do the suturing. Yes, with a real needle and thread.

“I had spent a lot of time with the on-set nurse learning how to do that specifically. The prosthetic department had given me a bunch of different prosthetics with the scar on it so I could practice at home. I would glue it to my coffee table and stitch it.”

So how did it go on set? “It was a little nerve-wracking, actually, because the prosthetic is very thin and you’re quite close to the skin and I was terribly nervous that I was going to poke Aaron with the needle. It was one of the more challenging moments.”

Photo of Strahovski courtesy of FayesVision/WENN

Photos from I, Frankenstein courtesy of Lionsgate.