The Monuments Men has a male ensemble and plenty of girl power. Cate Blanchett holds her own in this all-boys club. 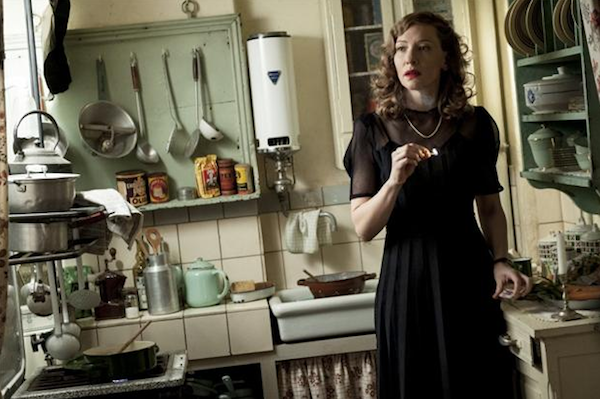 “Cate Blanchett is an international treasure.”

That’s high praise from her Monuments Men co-star Matt Damon. As the female lead, the Oscar-winning actress is surrounded by an array of veteran actors. Blanchett stands out among a cast that includes Bill Murray, John Goodman, Jean Dujardin and actor, director and screenwriter George Clooney.

In The Monuments Men, Blanchett stars as Claire Simone, a curator at a Parisian art museum. She’s based on a real person who worked at a museum that became the hub for a Nazi looting ring. At that time, the Germans were going across Europe snatching priceless paintings and artifacts. The French were trying to hide their treasures, but the Germans kept finding them.

In the film, a platoon of American soldiers is tasked with locating the stolen art objects and returning them to their rightful owners. And the success of their mission hinges on Claire, who has vital information. During her time at the museum, she overheard the Nazis’ plans for the art. She memorized and catalogued where all the art was going.

Claire is the key to helping the “monuments men” achieve their goal, but before becoming an asset, she starts off as a challenge. How does she know the Americans’ intentions are pure? There’s no guarantee that they’ll return what they find, so even though the Americans’ mission sounds noble enough, they must first earn Claire’s trust.

Can the American soldiers break down Claire’s defenses before it’s too late?

Check out this featurette on Blanchett’s Claire


The Monuments Men opens in theaters Feb. 7. In the meantime, check out the journal of Claire Simone.