Octomom Nadya Suleman is in hot water after being accused of welfare fraud. 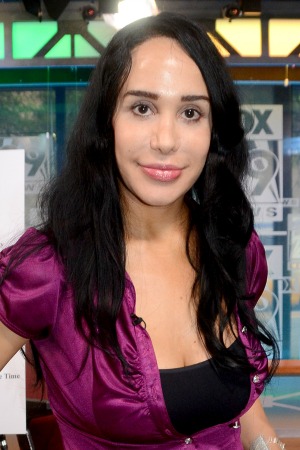 It’s not easy — or cheap — raising 14 kids, but Octomom Nadya Suleman is finding out the hard way that there is no getting around the rules of public assistance.

“She was running short on money. She went to the Los Angeles County Department of Social Services and asked for food stamps,” Deputy District Attorney Bill Clark told reporters outside court. “And they gave them to her.

Suleman has been charged with one count of aid by misrepresentation and two counts of perjury by false application. If convicted she could face nearly six years in prison — but prosecutors say they are willing to cut a deal if she can pay up.

“If she can pay the money back, that makes a big difference,” Clark said. “She’s got 14 children. We’ll try and work out a deal for her.”

It does raise a question, though: If Octomom goes to jail, who will take care of her 14 kids? Her own mother said although she is legally next in line as their caregiver, she really can’t handle it.

“It would probably kill me,” Angela Suleman told The Daily Mail. “I would get the best lawyer for this not to happen because I’m not young enough to take care of them, but of course I would help. I would actually take money out of my retirement check and have someone help me.”

Octomom was released on her own recognizance pending her next court date on Feb. 3, 2014.