After rumors exploded earlier this week that Amber Heard and Johnny Depp were secretly engaged, new confirmations have surfaced that they are true. 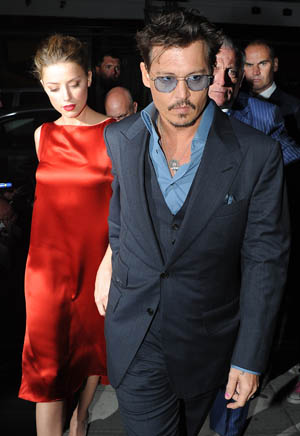 Did Johnny Depp really propose to Amber Heard? Looks like the rumors have been confirmed after sources claim the pair plan to marry in the near future.

According to an insider for Us Weekly, Amber Heard and Johnny Depp have been engaged for some time now. “The proposal happened a while ago,” the insider said. “She just didn’t wear the ring.”

The rumors first started when Heard was seen trying to hide her shiny ring from the press on Monday as she went into a restaurant in Los Angeles. The pair have not denied or confirmed their engagement yet, but Celebuzz also reiterated the news on their site yesterday.

Heard and Depp met on the set of their new movie, The Rum Diary, later confirming their relationship in June 2012 after the Pirates of the Caribbean star split from longtime partner, Vanessa Paradis. The pair were then seen trekking the world together and have made several public appearances as well.

The super-private duo was most recently seen together at the Golden Globe Awards on Jan. 12, and prior to that they cozied up at the Elysium’s 7th Annual HEAVEN Gala in Los Angeles.

The 50-year-old actor is gearing up to appear in another film with Heard, 27, when he’ll do a cameo in the thriller London Fields, which is based on the novel of the same name.

Meanwhile, Depp continues to co-parent the two children he shares with Paradis, Lily-Rose, 14, and Jack, 11. This past summer, the kids joined him and Heard on a trip to Japan, where Depp did promotional work for his movie The Lone Ranger. Judging by photos taken during that trip, Depp’s kids have taken to Heard quite easily, seemingly embracing her as their possible future step-mom.