Charlie Sheen has called a truce in his suddenly bitter war against ex-wife Denise Richards. 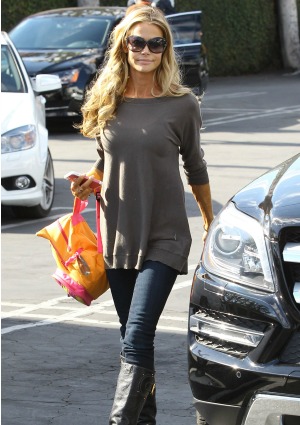 Charlie Sheen seems to have gotten over whatever made him go nuclear at his ex-wife Denise Richards.

After calling the mother of his two daughters a pig and threatening to kick all three out of their home (which Sheen owns), the Anger Management star has suddenly changed his tune.

“hey D!
truce?
I love Sami & Lola
too much to allow my
‘passion’
for real parental justice
to
obfuscate,
misalign
or
appear
mendacious
in mine AND
Scotty’s
pure and pleasant desire
to exhibit and express
‘our’
hart & soul love for
them.
xox
c&s
#RodneyKingOfAces
#DeletingPreviousSmears http://twitpic.com/dsdejm”

The actor’s rage seemingly sprung out of nowhere just before Christmas, when he reportedly believed he was uninvited from a planned holiday vacation with Richards and the girls. Sources have told various media outlets that Richards did in fact invite him along and is confused as to why he was so angry.

Some are pointing fingers at Rossi for Sheen’s sudden bad attitude. In addition to his spat with Richards, he recently fired three trusted longtime team members, allegedly at Rossi’s behest.

“Things have been extremely chaotic in Charlie’s camp for several weeks, ever since he began dating Brett,” a source told RadarOnline.

“His team expressed concerns over the relationship… He was not happy with being questioned about who he was dating, so Charlie fired them all. Brett had also encouraged Charlie to get rid of Mark, Larry and Jason because she believed they didn’t like her and were sabotaging the relationship.”

Tell us: How long do you think this truce will last?