Shia LaBeouf has done it again! The Lawless actor lost his temper during an altercation with a fellow drinker and savagely head-butted the man. 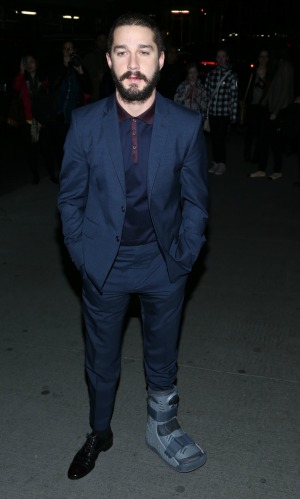 Shia LaBeouf hasn’t made any friends lately — he’s been the subject of ridicule and bad publicity since the story broke about his plagiarism of author Daniel Clowes’ graphic novella Justin M. Damiano.

Well, just when you thought things could not get any worse for the Nymphomaniac: Volume I actor, he has taken it upon himself to destroy what little reputation he may have had left and head-butted a man during a vicious bar fight.

The altercation took place at the Hobgoblin pub in New Cross, south London, on Thursday night, and apparently, the mother of the star’s girlfriend, Mia Goth, was the reason.

TMZ managed to get its hands on video footage, which shows the Lawless actor in a rage and shouting obscenities at a man.

LaBeouf is overheard saying, “What are you saying about my girl’s mom? Are you f***ing kidding me bro?”

Two women were screaming the Transformer‘s star’s name and when they finally managed to get him to calm down a female voice can be heard telling the man involved in the brawl, “Don’t be sarcastic with us again. Don’t even play smart.”

If you thought you may have recognized the name of the pub, the Hobgoblin, then you would be correct. This is not LaBeouf’s first bar fight brawl to happen in this pub. He was involved in a fight there with a fellow drinker in November 2012 after the man apparently jokingly stole his hat and refused to give it back.

It is evident that LaBeouf needs anger management. However, he has tried to make a feeble and drunken attempt at an apology.

According to TMZ, LaBeouf tried to explain that he is riddled with faults and confessed, “I’m super normal.”

And the altercation only happened because he was defending his girlfriend’s mother’s honor. LaBeouf admits he does not take it lightly when “people s*** on my girl’s mom.”

Plagiarism, retirements and bar fights… what could be next?