Matthew McConaughey and Leo DiCaprio are winning basically every lead actor award this year. So, who will take home the award for Best Actor at the Oscars? 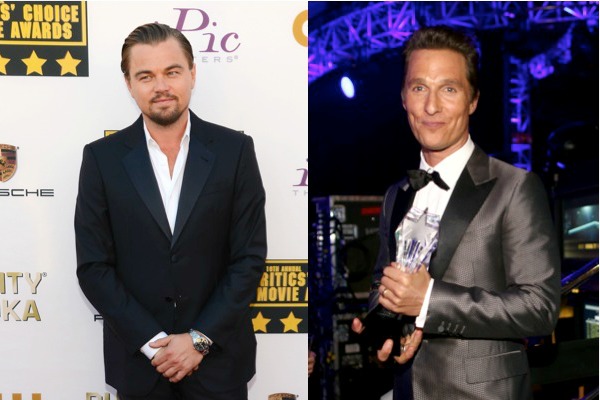 When Leonardo DiCaprio won the award for Best Actor at the Golden Globe Awards, it appeared he may finally get his Oscar.

DiCaprio was first nominated for an Academy Award 20 years ago this year, for his role on What’s Eating Gilbert Grape?, and he has since been nominated two more times (three, if you include this year). But the actor is one of the rare A-listers who has never won.

He again won an award for his role in The Wolf of Wall Street Thursday night at the Critics’ Choice Awards — does it mean he is a sure thing for the Academy Award?

The Critics’ Choice Awards and the Golden Globe Awards split their films into different categories. So DiCaprio wasn’t the only one taking home Best Actor trophies at both shows. Matthew McConaughey won the award in the other category both times.

McConaughey has never been nominated for an Academy Award, and he is facing stiff competition with DiCaprio and the other nominees. He said he woke up early Thursday morning to watch the nominations, and he was the last one called.

“They went through all four names and I said ‘there’s only five,'” McConaughey told Entertainment Weekly. “Then I think I saw the shot of me as Ron Woodroof before I heard my name. Yeahhh, it was nice.”

He may be the underdog, but McConaughey got rave reviews for his role in Dallas Buyers Club. DiCaprio also received plenty of praise for his role in The Wolf of Wall Street, even though the stories couldn’t be more different.

Both actors have proven they are deserving of the award, but who will win?