Aisha Tyler was at the helm of the Critics’ Choice Awards Thursday night, to the delight of the audience. But as the night went on, she seemed to tell everyone how she really felt. 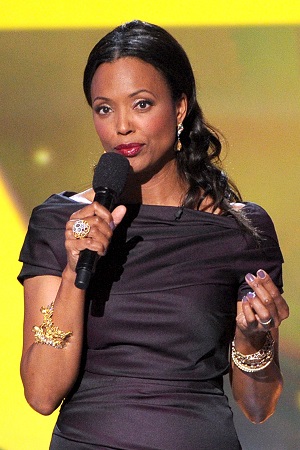 Aisha Tyler may have seemed like an unlikely host for the Critics’ Choice Awards, but her comedic background made her the perfect choice. She worked well with the crowd and joked about many of the movies or actors without ever actually bad-mouthing any of them.

But one group she did seem to enjoy slamming the entire night was the critics themselves. She started her monologue by saying the Critics’ Choice Awards was where “a bunch of people who absolutely hate movies tell you which movies they hated the least.”

Tyler seems to keep the crowd upbeat all night, appearing every now and then, as hosts do. But each time she appeared, she seemed to slam the critics one more time.

At one point, she asked the viewers at home to make sure to correspond with the show via Twitter, “because apparently no one in our culture can do one thing at a time anymore. See something you like, let us know. See something you hate, whine about it like a little baby. Congratulations, you’re a critic.”

Tyler made her critics jokes not in a playful way, but as if she really had something against the people who were putting on the show.

She went on throughout the show to throw jabs at others, but none of them felt as personal as her critic slams. As she introduced Oprah, who was on stage to introduce Forest Whitaker, she said, “Here is the woman who could buy and sell us all twice, and somehow make us think she was doing us a favor. Oprah Winfrey.”

Winfrey didn’t exactly seem to appreciate it, but seemed good-natured. Throughout the night, Tyler was playful and joking about many of the actors and films, but always going back to the critics.