Sandra Bullock understandably won at the Critics’ Choice Awards, but while she was up accepting her win, she gave a very bizarre speech. 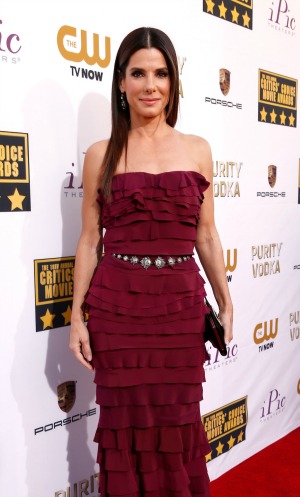 Sandra Bullock may have given one of the most interesting, but most awkward, speeches at this year’s Critics’ Choice Awards. The actress won for Best Actress in an Action Movie for her role in Gravity.

As Bullock was giving her speech, it looked like the award show jumped the gun and began playing a sound effect from a different area of the show. Viewers on TV all of a sudden heard silence as Bullock said, “What the f***?” for being interrupted during her speech.

She then added that nobody better mess with her, because, “I am an action star.”

Although Gravity may not be the film with the most action, it didn’t really fit into any other categories. Bullock as an action star got a laugh from the crowd.

The rest of Bullock’s speech was pretty ordinary (she is pretty used to giving these by now), and she thanked everyone for her role on Gravity. And she especially thanked her co-star in the film, in a major spoiler alert!

“I’d like to thank George Clooney for floating away and not coming back,” she said.

Bullock was also nominated for an Oscar Thursday morning, and even though she is a big movie star, she seemed speechless.

“It’s only my second time, so I don’t know how anyone gets used to it. I already had the most unbelievable life and work experience when I made Gravity,” she told the Los Angeles Times.

So who are the critics behind the Critics’ Choice Awards? >>

“When something like this comes along, it’s humbling. I don’t know how to explain it. Some people get nominated a lot. I don’t. I don’t take anything for granted at any moment. I don’t assume anything is coming my way. It feels so otherworldly.”

Sandra Bullock continues to be as perfect as ever, so no one seemed to notice the quirkiness of her speech at the Critics’ Choice Awards.