Kate Gosselin’s twin daughters clammed up during the Today show when asked how they were doing as a family. 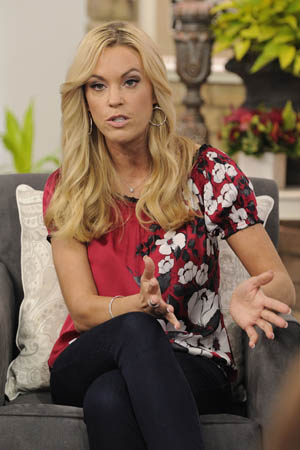 Starting with Mady, Guthrie began the interview by wanting to know how she and her seven other siblings have been doing since TLC’s Kate Plus 8 was canceled two years ago. But the 13-year-old just stared at the host, saying, “Umm…” not knowing what to answer, allowing for a very awkward few seconds.

Gosselin, clearly embarrassed and anxious for her daughter to say something, tried prodding her along, “Mady, use your words. It’s your chance.” However, Mady remained mum and frowned at her mother as the former reality star continued trying to get her daughter to talk.

“This is their chance to talk! This is the most wordless I’ve heard them all morning,” Gosselin said, trying to keep a smile on her face. “I don’t want to speak for them but, Mady, go ahead. Sort of the things that you said in the magazine, that years later they’re good, they’re fine. Go for it Mad, it’s your chance.”

Mady kept silent and then nervously looked at her mother and quietly said, “No. You just said it.”

Trying to get things to move along, Guthrie then asked Cara if people had the “wrong impression” of her family. But she still remained silent as she awkwardly looked at the camera until her sister decided to finally say something.

“I wouldn’t say ‘wrong,'” Mady said. “I would say not the full, like, story. Like, a lot of people think that filming our show has damaged us, but it’s only really helped. It’s not really done any… damage.”

After Mady’s attempt at describing how well they’re doing, Gosselin took over and explained why her twin daughters are trying to clear up the image viewers have of her family, and why they did a People magazine interview and went on the Today show. With numerous rumors, ex-husband Jon Gosselin’s ongoing negative comments, and constant bad press, they just want everyone to know they’re doing well.

“They get really frustrated that people assume certain things in our house and they always say, ‘But that’s not how it is, Mommy. Why do they say that about us?’ Any TV things that we do, obviously, I mean I can’t get them to do, at this age, 13, anything that they don’t want to do,” Gosselin said. “It’s not like I forced them to do it. They agree to it, as with my 9-year-olds. It’s a family decision.”

Gosselin went on saying that while she’s not too worried about what people say, her kids wanted to set the record straight and squash all the negative talk.

“That’s why they’re here, even though they’re tongue-tied this morning,” Gosselin said. “To say that we’re OK. We’re doing well.”