When it comes to love, celebrities are loud and proud. Don’t believe us? Just check out these sweet tweets exchanged by some of Hollywood’s sappiest stars. 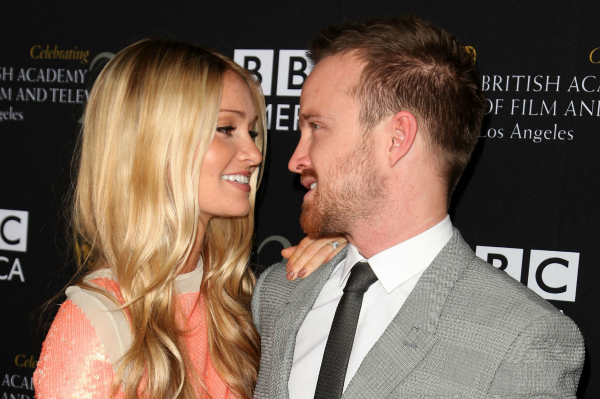 Ever since Aaron Paul met Lauren Parsekian, he’s been crowing about his “pretty bird.” It’s adorable, and we can’t get enough. As such, in full disclosure, you’ll see his name again on this list.

Jessica Alba and Cash Warren are one of those Hollywood couples who seem so genuinely in love and so above all the drama. Don’t you think they’d be the best double-date couple?

It’s clear Alba and Warren have a mutually affectionate relationship — even after two kids! One thing’s for sure: They’re setting a great example for their sweet girls, Honor and Haven.

We’ll be the first to admit we had our doubts when Nick Cannon and Mariah Carey got married. But the couple really leaned on each other during Cannon’s health issues, making believers out of us.

American Idol alum Paul McDonald is cute, cute, cute — and it looks like he’s also a big softy. He often showers his wife, Twilight actress Nikki Reed, with sweet little nothings like this.

Since meeting Broadway dancer Courtney Mazza in the fall of 2008, Mario Lopez has become quite the romantic. He can’t stop singing the praises of the mother of his precious babies, Gia and Dominic.

What can we say? We’re about as smitten with Giuliana and Bill Rancic as the two are with each other — and we all know that’s a lot.

First of all, if you haven’t been listening to Josh Kelley’s music, go forth and get some. Second, how adorable is this tweet to Katherine Heigl? We can only imagine the night ended in sweet music.

How great is it that Vanessa Minnillo and Nick Lachey found each other? The down-to-earth actress, who took her hubby’s last name when they married, obviously adores her boys.

What a crazy ride it has been over the years for Carey Hart and Pink! But hey, they always found their way back to each other, and now they have a beautiful family and a murder-free marriage to show for it.

She may look tough, but Pink has a real soft spot for her hubby. Shortly after their wedding, she admitted she became traditional and emotional, which was a weird experience for her and Hart.

Ellen is funny, she’s smart, she’s sweet, she’s funny (so true we had to say it twice) and she is head over heels in love with her wife, Portia de Rossi.

Pay attention, fellas! If the POTUS can find time to say how much he loves and adores his wife, you can certainly muster up some heartfelt sentiments for your girl.

We don’t care what Jay Mohr says — Alyssa Milano is gorgeous. Clearly, the look of love suits her, as evidenced by this glowing pic of her and her husband, David Bugliari.

A far cry from Evan Rachel Wood’s ex, Marilyn Manson, Jamie Bell not only doesn’t creep us out, but he actually makes us swoon with his sweet words to his lovely wife.

There was a time when we questioned whether Evan Rachel Wood would ever settle down. We think she seems the happiest we’ve ever seen her now that she’s married to Bell.

Told you that we’d be seeing him again! C’mon… how could we not? We’re pretty positive he is, hands down, the sweetest, most in-touch-with-his-emotional-side guy in Hollywood.

Such a wonderful husband deserves a wonderful wife, no? Aaron Paul picked the right one when he married Lauren Parsekian. The Breaking Bad star’s wife seems like a total keeper.