Kanye West already thinks he’s a god, but now apparently a bunch of other people do, too. The controversial rapper is the center of a new religion. 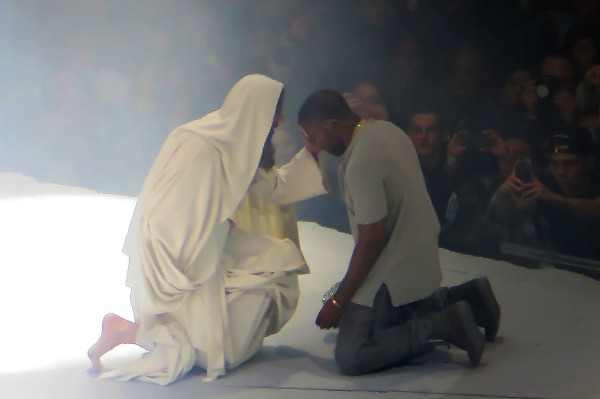 Kanye West’s fans already worship the ground he walks on and now they can take their idolatry to a more spiritual plane. An anonymous artist has created a religion based around the controversial hip-hop star.

Yeezianity is a Christian-based religion, but instead of Jesus, followers worship Yeezus.

“In a lot of ways, after I created it, I reflected on it and thought that this was just a rehashing of Christianity, but just throwing Yeezus instead of Jesus,” the group’s anonymous founder told Noisey. “And you know what? That’s why I felt Kanye did it. He just put the name there. Jesus has all this baggage and all these connotations, and Yeezus is this new thing — and that’s why I say in the ‘Our Savior’ part of the site, ‘We don’t speak of his public persona.’ Because Yeezus is when Kanye elevates to that God-level, which I feel like we all have the potential to do. That’s why if it takes off, in the future, people would forget Kanye and his antics and instead focus on what the message is.”

“He’s a god. You’re a god. Why Yeezus is the figure is because Kanye is the one who believes that the hardest, so that’s why he’s the model for behavior.”

The religion is based around the “Five Pillars,” or principals in which followers believe:
1. All things created must be for the good of all.
2. No human being’s right to express themselves must ever be repressed.
3. Money is unnecessary except as a means of exchange.
4. Man possesses the power to create everything he wants and needs.
5. All human suffering exists to stimulate the creative powers of Man.

But the founder says we shouldn’t take Yeezianity, or any religion for that matter, too seriously.

“As a society, we have to move forward with the way we view religion and one another,” he explained. “The whole point of spiritual growth and expanding your consciousness is that you can hold two ideas that are juxtaposed to each other, and by holding them together, you understand the other better in it of itself. So I don’t see it as, ‘Oh, are you a member of the Church of Yeezus, or are you a Catholic?’ That’s why with membership, there’s no point where you’re really a member and you have to, like, attend a meeting or something. Just when you think about it, you’re a member for that moment.”

West, who is facing possible assault charges after allegedly beating the tar out of a man who yelled racial slurs at Kim Kardashian, has not commented on the movement.