Mel B had to rush her daughter to the emergency room for what could turn out to be a serious health condition. 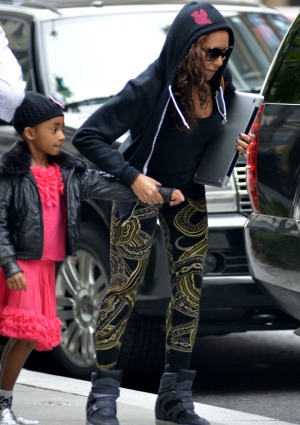 The Spice Girls told us to “Spice up your life!” but we’re sure Mel B didn’t mean quite like this. The singer-turned-radio-personality revealed she had to rush her young daughter to the emergency room under pretty scary circumstances, and it might turn out to be a serious health problem.

Mel B, who hosts 2DayFM’s Jules, Merrick and Sophie with Mel B, revealed she almost didn’t make her own show Wednesday because of the medical emergency.

“This morning’s been a little bit crazy because my 6-year-old Angel was feeling not very well yesterday, she was a little bit dizzy and had her first nosebleed, so I kept her off school,” Brown explained. “And then this morning she woke up feeling completely disoriented, and blood was just funneling out of her nose like no tomorrow. So I rushed her to the emergency room, I just literally left there like half an hour ago. She had a blood test, a heart murmur thing on… poor little thing!”

“[The doctors] don’t know [what’s wrong], they’ve just done a bunch of blood tests so we’re just waiting for that stuff to come back. But they’re thinking it’s either some kind of a heart murmur or a vessel infection or sinus infection. A lot is going on!”

Speaking of a lot going on, would one of those things be another Spice Girls reunion?

“You know, I get asked this question a lot, and out of the five, it’s always me saying yes!” she laughed. “It’s just a case of getting everyone else to say that, too. But I will not give up, at some point this year I do hope to be performing with The Spice Girls. And if not… I’ll just have to kill them all!”

No wonder Victoria Beckham hightailed it back to the U.K.

Tell us: Do you want to see another Spice Girls reunion?