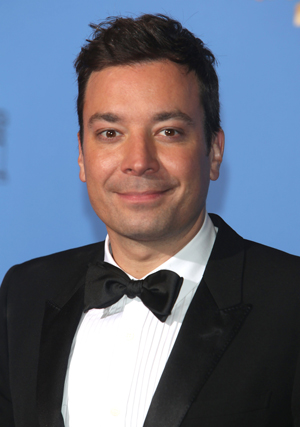 Bruce Springsteen stopped by Late Night with Jimmy Fallon Tuesday night, and teamed up with the funny host to do a parody of Chris Christie’s Bridgegate scandal with a hilarious remake of “Born to Run.”

Being introduced as The Boss himself, Fallon appeared on stage in typical Springsteen 1970s gear and holding a guitar. He began singing the reworked famous tune, which was changed to reflect the Fort Lee traffic jam that the New Jersey Governor is implicated in.

About a minute into the song, Springsteen himself walked up next to Fallon, wearing an identical getup, and curiously making the decked-out pair almost look like twins.

“Governor, let me in I wanna be your friend, there’ll be no partisan divisions,” the self-professed Democrat Springsteen sang. “The press conference went on and on, it was like one of my own damn shows.”

They go on singing and end the tune with a chorus of, “Oh-oh-oh, now I really gotta pee… I really have to take a leak!” referring to possible thoughts of passengers who were stuck on the bridge.

To refresh the situation, Bridgegate took place in September 2013 when the Port Authority shut down two of three access lanes connecting Fort Lee, New Jersey, to the George Washington bridge, resulting in a massive traffic jam. While in the beginning officials said the closures were due to a traffic study, several emails released to the public claimed that the lane shutdown was done to punish Fort Lee Mayor Mark Sokolich. Apparently, Sokolich did not endorse Christie and this was supposedly a payback.

Meanwhile, Christie has claimed that he had no knowledge of the lane closures, or of the emails that were being sent out.

You can watch the hilarious Springsteen-Fallon Bridgegate parody on the video below: