Chris Hemsworth and his wife were delighted to find out they were expecting a second child, but now it looks like they could be expecting a third child at the same time. 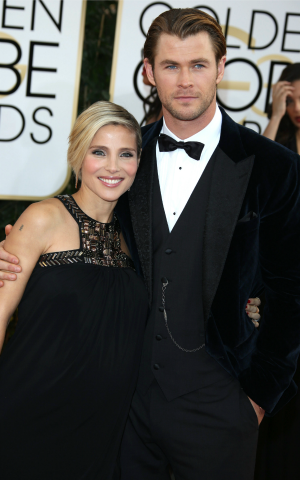 Chris Hemsworth and Elsa Pataky’s baby news just got twice as exciting! The couple is reportedly expecting twins, according to HOLA! magazine.

The couple announced back in November that they were expecting a child, and showed up glowing to the Golden Globes on Sunday, Jan. 12. Pataky showed off her baby bump in a black gown.

Hemsworth and Pataky began dating in 2010, and were married only a few months later. They already have a daughter together — 1-year-old India Rose — and seem so excited at the possibility of a new child — or two!

“I think [parenthood] brings out the child in all of us,” Hemsworth recently told Parade magazine. “That’s what’s so beautiful. It reminds you of the fascination you had with things and how you can spend hours just being with someone. It’s amazing.”

He also told E! News back in June that fatherhood “puts things into perspective,” and he feels that he has been changed “for the better.”

The Thor star seems completely in love with his new daughter, saying, “She’s the best!” India Rose will hit her second birthday before her mother gives birth to the new sibling (or siblings).

Hemsworth said having children also makes it very difficult to do what he does every day.

“It makes it harder to leave and go to work,” he explained. “I enjoy being at home a lot more than I ever have.”

Pataky agreed, saying that as actors, they tend to be pulled apart. But the Hemsworths do all they can to stay as close as possible.

“You have to make an effort and try to stay together as much as you can,” she recently told People magazine. “If we start splitting and doing other things it’s not going to last. We try and keep it as normal as much as we can — like a typical family.”

Pataky is now in her third trimester, and is expecting her baby or babies in just a few months. Despite the reports of twins, the couple has yet to publicly comment on the news.