Gisele Bündchen may be a professional glamour girl, but she says she is decidedly low-maintenance during her downtime. 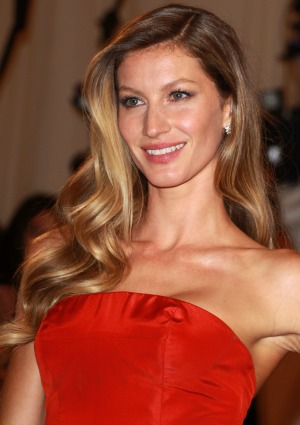 Supermodels: They’re just like us! Except, you know, we actually brush our own hair.

Gisele Bündchen says she doesn’t even own a hairbrush because other people do all the heavy lifting for her.

Rather than actually lift a brush to her famous beachy waves all by her lonesome, she simply prefers to sweep it all back in a “sleek bun,” she said. Not that far-fetched for a mom of two, actually.

Bündchen also revealed that although her husband Tom Brady is a huge football star, there’s only one fan of the game in their house. She only watches if he is playing, otherwise she tunes it right out.

“At night if my husband is watching TV and watching football, I have my little book and I put something in my ears so I don’t hear it and I put my light (on) and have my book and I’m like, ‘Ohhh.’ He’s feeding his soul and that’s important to him to watch football. I only watch if I’m watching him,” she said.

But when the TV is off, it’s total family time. “He’s very loving and it’s a wonderful thing,” she said of her husband. “In our house we are very affectionate.”

The model recently came under fire for a photo showing her riding an all-terrain vehicle and babywearing her baby daughter Vivian while neither were wearing helmets. The Mommy Mafia came out in full force in blogland to condemn Bündchen’s parenting choices, so much so that she felt it necessary to have her rep respond to the criticism.