Johnny Depp and Amber Heard enjoy their privacy, but do the couple have a major secret they aren’t sharing about their relationship? 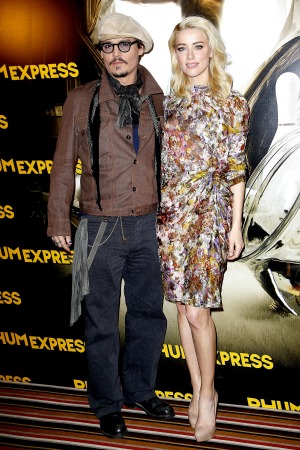 Johnny Depp and Amber Heard‘s relationship has not been without its complications, but it appears the couple have worked through any issues they may have had because the blond beauty was reportedly spotted earlier this week wearing an engagement ring.

The Paranoia actress sent the rumor mills turning when she was seen with what looked to be a massive bauble on her left-hand ring finger, which she desperately tried to hide from the prying eyes of the paparazzi as she entered a Los Angeles, California, restaurant on Monday.

But since then, there have been suggestions as to whether the couple have become engaged.

According to E! News, “Heard and another woman hit LA restaurant Ago for dinner last night [Monday] and it was when she was first heading in that the intrepid photographer noticed her hand.”

“On her way out, she was doing everything to hide her hand. The actress also waited for the valet driver to open her car door for her, seemingly so as not to have to expose her hand for an extra second.”

The couple met on the set of the 2011 movie The Rum Diary, although at the time the actor was still married to his former wife of 14 years Vanessa Paradis, with whom he shares two children Lily-Rose,14, and Jack, 11.

After his mysterious split from his wife, the The Rum Diary actor and his co-star got together, but their romance has certainly had its ups and downs.

Heard even ended their relationship at one point because she did not want to be tied down, but a completely smitten Depp was unwilling to let this romance fail and desperately tried to win back the London Fields star’s affections.

According to the Daily Mail, a source revealed in 2012 just how dedicated Depp was to making his relationship work. The source said, “Johnny didn’t give up — he missed her so much over the summer. They both love literature and the way he tried to win her back totally worked.”

“Once they flew for a romantic break [in the Bahamas], they were back on as a couple. Johnny’s the type to fall hard and he’s vowed not to let a girl like Amber, who’s beautiful and intelligent, slip through his fingers.”

If the rumors are true, then we offer a big congratulations to the happy couple!