On “Home is Where the Heart is (Seriously. Check the Floorboards),” parents aren’t the only ones lecturing the teens in Ravenswood. 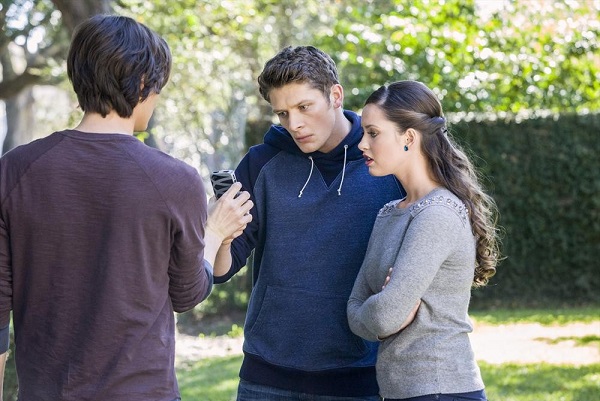 There were a lot of surprising developments on this week’s Ravenswood. I guess when the series is limited to only 10 episodes for the entire season, they don’t have time to rest on their laurels. Let’s check out all the revelations that came to light.

Mrs. Matheson was arrested for a knife someone found on their property, conveniently triple-bladed and covered in a bloody shroud. Even the worst planned murder would unlikely result in burying the weapon in your own backyard.

Luke got angry enough that his mom was being arrested that they arrested him for disorderly conduct or something, which was also very convenient, as an old fellow in the cell next to him had a pipeline to the supernatural and told him the same thing Remy had said after she spent the previous night scrawling all over a myriad of sheets of paper — “You should not have seen.” She wrote that, drew a whole lot of crows and wrote a lot of otherworldly phrases — she’s a busy bee.

Caleb’s dad showed up with the news that Henry Rivers had passed and left him the house and instead of being happy to see him, Caleb dropped a bombshell on his daddy. He said that the only reason he was with Hanna was because his dad had pushed him to be with her.

I tried thinking back to the time when Caleb was looking for his uncle, at the garage sale on Pretty Little Liars, and I think he might be right. It was shortly after Caleb returned from his mother’s and he and Hanna were sort of on the outs. Finding his dad did draw him and Hanna back together. Hmmm.

Miranda realized that the spirit living in the house with Mrs. Grunwald was her mother, Beatrice. Her mother was in one of the groups of five teens who was killed and Collins has her hair and she’s been there ever since. She’s never wanted to leave because she wanted to be as close to her daughter as possible. Rather tragic, actually.

She does tell Miranda that she has no idea what she’s messing with in trying to break the pact and to be happy she has protection.

Collins seemed out of sorts that Luke and Olivia don’t like him, and when he spoke with Grunwald it came to light that Springer knows more about all of this than he should, and that’s likely why he’s starting to implode. Ravenswood is like Stepford (you know, with the wives?) or The Lottery by Shirley Jackson, where everyone pretends like everything is just fine and dandy, but almost everyone is aware things are pretty well screwed up.

They must have decided to take teenagers for the pact because they’re at the age where they’re on the cusp of caring about things and yet their souls are probably more worthwhile than that of a child, who is pure innocence.

Although Collins and his family were there to create the pact, they somehow found a way to stem the damage done to the souls who are taken. How does that sound? The more we discover, the more fun it is to try to imagine from where the writers were taking their clues. Come on, drop us a comment!