May and Coulson discover the truth about Skye’s past, while the rest of the team works together to solve a mystery at Fitz-Simmons’ alma mater in “Seeds.” 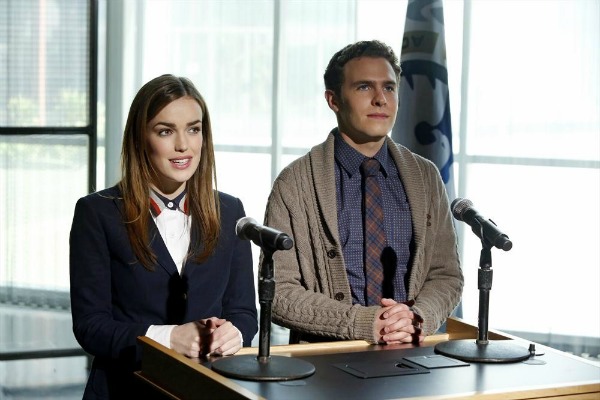 I know that a lot of people have been wondering when Agents of S.H.I.E.L.D. was going to start living up to the hype that surrounded it ever since it was announced that Joss Whedon was behind the show. I wanted to fall in love with this series from the very first scene, but so far it’s bordered on “so-so” to “pretty good.” Last week’s episode definitely took things up a notch to “good” and I think I’m prepared to say that this episode just broke into “awesome” territory.

There were so many things that I liked about this episode and I think that’s what took it to a new level for me. It wasn’t just a few scenes or just one storyline. I enjoyed this episode pretty much from beginning to end.

Splitting the team up into smaller groups was a fun way to get some of those special interactions that highlighted the relationships between different characters. There was May and Coulson going off to Mexico together to look into Skye’s past. First of all, just the mere fact that May was willing to do that was great, but when you combined it with the heart-to-heart she and Coulson had in the car, it turned into a really fantastic moment. I loved that May was trying to keep Coulson distracted and the fact that he was fully aware of what she was doing. I also liked that she asked him to trust her and that she would tell him if she thought he had been changed by what happened to him after he died.

With Coulson and May gone, that left Ward, Skye and Fitz-Simmons working a case together. That gave Ward the chance to put on a suit and be the leader, but he never took advantage of his position. In fact, he even showed a little heart when he told Fitz to go off and bond with Donnie. Of course that didn’t lead anywhere good, but let’s not dwell on that, shall we?

It was also a lot of fun to see Fitz-Simmons back at their alma mater and to find out that they were actually quite popular in school. Ward and Skye’s reactions to that knowledge were priceless and I liked getting to see the geeky duo in a new light.

The connection between Skye and Coulson was another highlight in this episode. I figured that once he and May discovered the truth about Skye’s past, they would keep that information to themselves for a good, long while and it would be revealed during some huge scene in an upcoming episode down the line. Instead, Coulson decided she deserved to know and I found myself getting choked up at her reaction. It was a beautiful scene and I thought having his voice fade out and seeing the response in her eyes, plus the hand he put on her face, was brilliant.

I know we’ve seen stirrings of the family bond before, but it really felt like the team bonding went farther than ever before in this episode. It made my heart happy to see and I can’t wait for more. I’m just sad we won’t get any new episodes again until February.

Ward in a suit. Just saying.

May telling Coulson to put his file away.

“That is a wonderful idea.”
“Ward has them from time to time.”

Simmons and Skye noticing that the “Tin Man” had a heart after all. Aw.

Ward’s obvious jealousy when he saw the science nerds had a cool party space.

May announcing that she and Ward were having sex. Well, to be fair, Coulson had just said he wanted to root out all secrets.

“Sometimes it’s not a bad seed, just a bad influence.”

Skye telling Coulson that whatever he had to tell her couldn’t be worse than what she imagined.

Coulson holding Skye’s hand as the plane was going through the storm.

“Here I am telling her something that could destroy her faith in humanity and somehow she manages to repair a little piece of mine.”

Ward’s little smile as Skye was touching Avery’s name on the wall.

Quinn telling Coulson that the clairvoyant told him to say hello.

What did you think of this episode of Agents of S.H.I.E.L.D.? Do you think Coulson made the right decision by telling Skye about her past?