Charlie Sheen posted a crass tweet to let his ex-wife Denise Richards know she is being evicted from the home she shares with the couple’s two daughters. Is it his girlfriend’s fault? 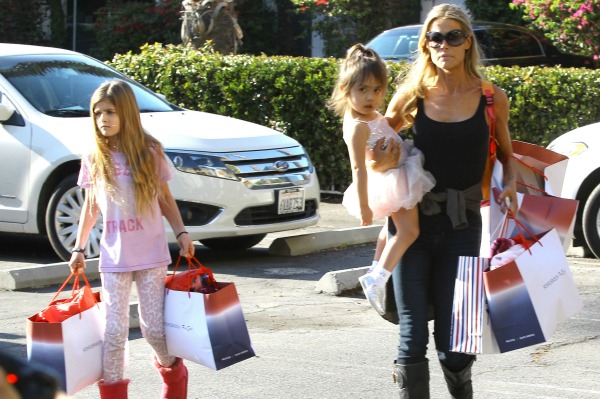 Charlie Sheen has upped the ante in his latest war against Denise Richards. He is trying to evict her and their daughters from their home.

Sheen owns the homes in swanky Mulholland Estates where Richards and his most recent ex Brooke Mueller live, and while he has already started the process of selling Mueller’s home out from underneath her, now he wants to do the same to Richards — despite the fact that she has sole custody of their two daughters and took in his sons when both he and Mueller were deemed unfit.

In a weird poem posted on Twitter, Sheen called Richards a pig and said the media hates her.

“Brett wants Denise out of the neighborhood because she is insanely jealous of her,” an insider told Radar Online.

But Rossi says she has nothing to do with the strife and that Richards is fabricating the entire situation to gain sympathy.

In a statement on TwitLonger, Rossi wrote, “I AM a child of divorce. I AM an advocate for children having a loving, healthy relationship with BOTH parents and always will be. I have NO problem helping make this happen, however such as life [sic] there should always be boundaries.”

Charlie Sheen goes off on DCFS for failing his kids >>

“I would like to see evidence providing that my statement above is FALSE. Until then, these stories will and ALWAYS will be irrelevant and fabricated. As well as not in the best interest for ANY child. I will no longer take the abuse from the press as I have nothing to do with other people’s actions or disagreements. This is ancient history; google it… You protest privacy yet running to the press doesn’t make you exactly a saint.”

Richards has not issued any official statements on the matter.