According to Aubrey Peeples, a truce isn’t in the cards for Layla and Juliette anytime soon, let alone a friendship. The drama of Nashville returns tonight! 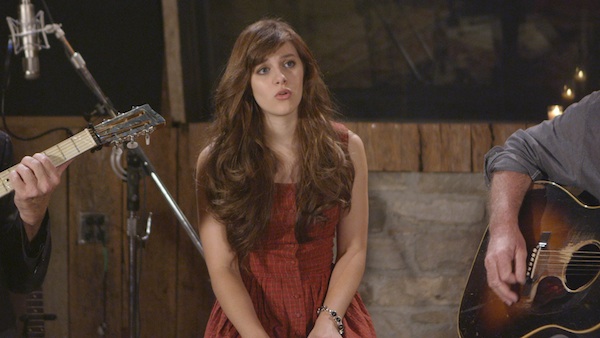 Rest assured, Aubrey Peeples is nothing like her cutthroat Nashville character, Layla Grant. In fact, the country cutie, who is well on her way to stardom, has a really great friendship with co-star Hayden Panettiere, who plays Juliette.

“Working with Hayden is hilarious because I feel like we both have way too much fun fighting,” Peeples shared with SheKnows. “And in between takes, we’re just like, ‘Oh, my god, I’m so sorry. I’m so sorry.’ We just keep apologizing to each other, but it’s great.”

We asked Peeples if she thought Layla and Juliette could ever be friends, and the actress thought there was potential.

“That would be interesting,” she said. “I think it’s possible, just knowing how life works… I think they just finished filming Episode 14, and that was the latest script I read. As of that, don’t worry, there’s still going to be lots of sparring to come.”

OK, so it doesn’t seem like Layla and Juliette are heading toward a truce anytime soon, let alone a friendship. Maybe in Season 3?

The Layla drama continues with a little backstory

When Season 2 of Nashville returns, viewers are going to get to know Layla Grant a little better.

Of course, Peeples said there is also going to be drama regarding the situation with Will, but she couldn’t say more than that. Maybe when Will returns (assuming he survives the train), he’ll finally come out as gay. We’ll have to wait for the show’s return to discover Will’s fate.

Making it in Hollywood can be tough, but Nashville‘s where it’s at

When it comes to her personal life, Peeples prefers to avoid the drama.

“I think that any actor or actress has probably come in contact with people like [Layla]. And I will say that you definitely have to be determined and hard-working, but the manipulation and the cutthroat attitude definitely gets out there, and there are [lots] of people like that, but you just come in contact with that in any competitive environment. I try to stay away from that, the crazy!” Peeples explained, laughing.

Kelly Clarkson to bring her vocals to Nashville >>

Luckily, she hasn’t had to worry about that with the cast of Nashville.

“I love working with everyone,” Peeples shared. “I can honestly say that no one on this show has been bad to work with. It’s so lovely. It’s really like a close family.”

The show has created quite the bond between the cast and crew — both through the environment of Tennessee, where the show is filmed, and through the musical culture.

Just before the show wrapped for the holidays, Peeples had the opportunity to perform at the Opry with Chris Carmack, who plays Will. She shared with us her desire to perform again in the future. We think the odds are in her favor. The Opry has, after all, become a popular stomping ground for the cast of Nashville while filming in Tennessee.

As for what’s next, Peeples will begin 2014 by continuing to film Season 2 of Nashville. Later this year, she will star alongside Nicolas Cage and Danny Glover in the thriller Tokarev. Peeples also hopes to continue with her music and put out an album of her own someday soon.