Gabourey Sidibe has a pointed message for fat shamers: Her life is awesome just the way it is, thank you very much. 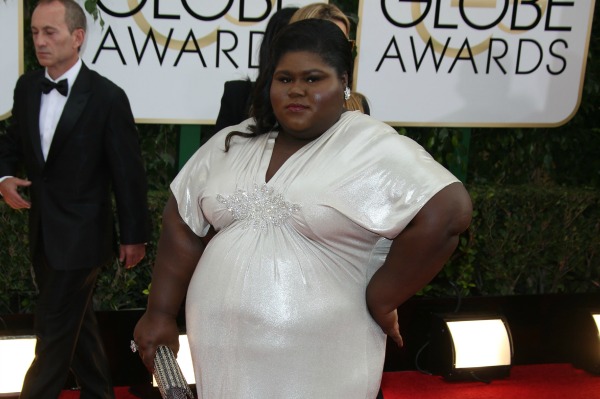 Gabourey Sidibe is riding high on her success in the highly acclaimed series American Horror Story: Coven, but that hasn’t stopped the haters from trying to bring down the plus-size talent.

After yucky people tried to insult her by slamming her red carpet look at the Golden Globes, Sidibe responded with the ultimate revenge: living well.

The Oscar-nominated actress wore a stunning cream Grecian style gown by Daniel Musto and Michael Costello for the Golden Globes festivities, but that didn’t stop people with ugly attitudes from getting mean.

While some celebs may have ignored the comments, the self-assured actress was not about to let these guys get away with it. She zinged back with the perfect response, then in a separate tweet thanked her real fans for their support.

At the Women in Entertainment Symposium in 2012, Sibide explained how she keeps her head held high in Hollywood where a “thinner is better” attitude is prevalent.

“When I was 21 or 22, I just decided that life wasn’t worth living if I wasn’t happy with myself, so I just took all the steps that I could to figure out how to love myself and become confident,” she said.

“I get shaken a lot, especially being in this business. A few weeks ago, I was on vacation and I went into a CVS and as I’m paying I see a picture of myself on the cover of a magazine, and they’re guesstimating what my weight is?”

“I have to keep going and living my life, so when things like that upset me I have to find things that build my confidence back up,” she said.