Molly’s challenges this season will include coming to terms with the abuse she suffered at the hands of her ex-husband as well as learning secrets about her family. Tricia Helfer opens up about playing tough but quirky Molly on ABC’s Killer Women. 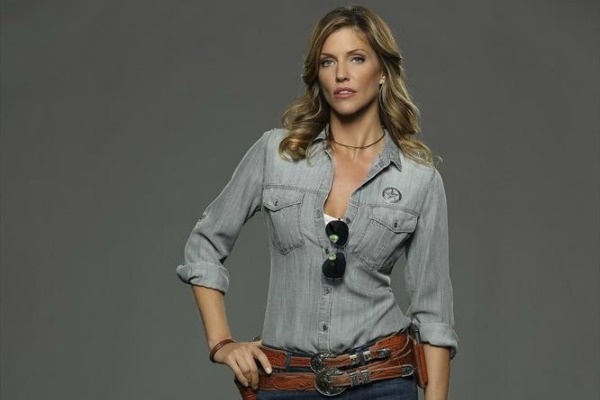 ABC’s new series Killer Women stars Tricia Helfer as a female Ranger who tracks down female killers using her gut instincts to see things the guys miss. SheKnows got the chance to ask Helfer about her role on the show, and she had some great insights into her character and what drew her to Molly.

“Molly is a strong personality for sure, but she’s well-rounded,” Helfer said. “She’s not just a tough tomboy, she can dress up, she can be quirky or vulnerable. What attracted me to her initially was that she’s just a well-rounded woman and not just one-note tough, as so many strong female characters are written. She can be a little stubborn, but she has a strong moral compass and wants to see justice served.”

Molly’s gut instinct has a life of its own, according to her boss. “I’d say one of her best qualities, at least in reference to her work, is that she listens to her gut instinct — or as her boss would say ‘one of those Molly feelings,'” Helfer said.

Just because the character is written as incredibly strong, don’t think that’s all there is to Molly, though. In the first episode, we learned she was a victim of abuse from her ex-husband. Helfer was surprised to find out Molly had been in such a relationship but soon realized it can happen to anyone.

“I found it intriguing to play someone that is so strong — not only physically but also emotionally — when it comes to work, but yet could be privately dealing with something as intense as domestic abuse,” Helfer revealed. “My initial reaction was, ‘How could she let herself be abused,’ but after researching, I realized that there is such a wide array of reasons that people can become victims. With Molly, she fell in love with a charming, charismatic man that subtly started to control her and put her down. That gradually intensifies, and at the point where physical violence starts, Molly already felt some of it was her fault or was embarrassed already that she had let it get even to that point. It’s a crazy circle and one that I thought would be interesting to play.”

For Molly, coming to terms with that abuse will be a big part of her journey this season as well as letting go of the past. “Letting go of the past means she’s going to have to deal with the issue and make it public since Jake is still trying to control her and not allowing the divorce to happen,” Helfer said. “She is ashamed and embarrassed, and it takes some soul-searching for her to finally stand up to it.”

Another thing that will hit Molly hard this season is something about her family — secrets that will come to a head in the season finale. “Molly is also going to have the rug pulled out from underneath her when it comes to believing her father was as upstanding as she remembers him and that her brother is the golden boy as well,” Helfer said. “Her brother has been hiding a secret that she will find out about towards the end of the season and the finale is dealing directly with that situation.”

Molly is surrounded by men in her professional life and her personal life, and each one of them has a different type of relationship with her, starting with Dan — a co-worker and a lover.

“Molly’s relationship with Dan is of equals. They are so in tune on a professional level that when they do have to work together, they immediately fit into it as a team. They respect each other and for both of them, work is extremely important so it can get in the way. Dan realizes Molly is hiding some hurt but doesn’t know what. He is giving her space and gaining her trust, but he is also starting to question her and get her to open up.”

The relationship Molly has with her older brother Billy is typical of siblings, but it turns out they are more similar than they may have thought. “Billy and Molly are (a) loving brother and sister,” Helfer said. “Billy is the typical older protective brother, but he knows that Molly can hold her own and doesn’t try to step on her toes. Billy is also hiding a secret and as it turns out, they are a lot more alike that they even know. Both strong, independent personalities that try to hold it together for everyone else.”

As for Molly’s boss, Luis, theirs is another type of relationship, and the two have a “great working relationship,” according to Helfer. “Molly can relax around him and be herself. Luis knows that she can be stubborn and can sometimes bend the rules, but he also knows that she has an incredible heart and tries to do what’s best.”

Luis is also a big fan of letting her trust that gut of hers. “He knows she has an uncanny sixth sense and he helps give her the confidence to listen to it,” Helfer said.

There is at least one woman that Molly can confide in — her brother’s wife Becca. Helfer said the two are “definitely opposites,” but because they know that about each other, they “love and respect each other for it.”

“They don’t try to change each other,” Helfer said about Molly and Becca. “Even though Molly is tough and a tomboy, she is also feminine and caring. Becca sees that about her and they can rely on each other for support.”

While it may look like all fun and games, playing a tough character like Molly has its challenges. Asked what the most challenging part is, Helfer admits it’s the long hours and the physicality of the role, which is taxing. “But it was so much fun to play her that it would override the lack of sleep I was getting,” Helfer said.

Helfer also did her research before taking on the role of one of the few women accepted into the Texas Rangers, but said she got most of her information from one source. “One of the most helpful things was having Marrie Aldridge (the first female Texas Ranger) as the tech adviser on our show. I talked with her about her career before filming the pilot and then, during the season, either worked with her on set or called her up to ask specific questions,” Helfer revealed.

Still not sure if Killer Women is a show for you? Helfer had something to say to fans who are thinking of checking it out.

“The show is suppose to be fun. It’s essentially a cop procedural, but it’s a little quirky. It’s got a strong female lead and fun female guest roles. There is a heart to the show, so it’s certainly not campy, but it doesn’t take itself too seriously. We had fun filming it and I kept hearing that from the guest characters, is that they so enjoyed playing roles that were out of the norm of what they get to play. I feel like there’s nothing else on TV like it right now. Someone told me the other day that it reminded them of a ’70s cop show, and I like that analogy. It’s got that sense of fun to it, even though it can be serious.”