In her latest song for her upcoming album, Lea Michele says, “Why don’t you scream a little louder?” But it’s obvious her talent is larger than life, and this massively infectious vocalist doesn’t need to sing any louder hereafter for us to get the message. 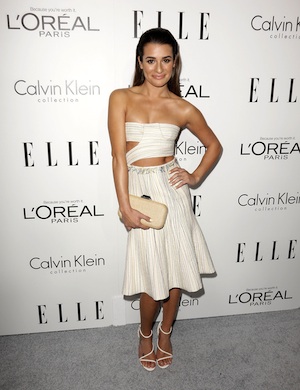 Do you remember learning about caterpillars in elementary school?

I mean, I know I was far more interested in learning how to make a volcano erupt back in school.

That said, first a caterpillar begins to metamorphose inside of a chrysalis, and then finally, it turns into a beautiful butterfly.

Lea Michele underwent a similar change. With the promise of an album from Lea Michele, music fans were shown the remarkable track “Cannonball.” Then they were presented with the transformative song “Battlefield,” and now we have the lighter, spirited and invigorated “Louder.”

Check out a review for “Battlefield” here >>

The third and title track to emerge from her future product breathes an air of refined maturity but also an inspired cathartic release.

I wouldn’t want to presume that every song we hear from Michele would be about the beloved Cory Monteith, but you almost want the impassioned vocals to be. Even for this more upbeat track, the vocals are tender enough that I can even almost hear a bit of the innocence of Rachel Berry from Glee.

Michele ascends to another level with the emergence of her own music into the industry. She brings not only a fresh face but honest vocals and a past laden with inspiration for storytelling. Though she may have become a television icon, her claim to fame is her songbird voice.

Michele told Billboard that “Louder” is about being bold and being yourself, even if people don’t understand it. While her album is set to make its impact on the world on March 4, you can hear her vocals make one with the song below.

There’s no pitying the songstress you hear in this track. She’s a fierce, fearless woman with a story to tell and a voice of an angel, and I know I can’t be the only one beaming with excitement to hear the whole album, right?