Meryl Streep is a Hollywood legend and Julia Roberts is America’s Sweetheart. How could August: Osage County be anything but brilliant with leading ladies like that? We take a look at what makes them such an epic pair. 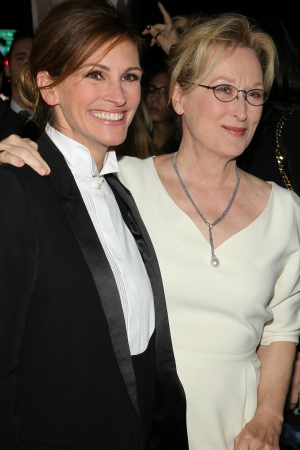 They are bosses at the box office

If Meryl Streep or Julia Roberts has a byline in a movie, you can pretty much bet your bottom dollar the film will be a hit at the box office. And when it comes to box office receipts, Roberts is right up there at the top of the most successful actresses — to date, her lifetime gross total is a whopping $2.6 billion! That means her movies average around $67 million at the box office. Not too shabby, eh?

Streep’s numbers are nothing to sneeze at either. The combined box office total for her 47 films is nearly $1.8 billion, making her average around $38 million per movie — although Mamma Mia! blew those numbers out of the water by bringing in $144 million at the box office. It remains her highest-grossing film, with The Devil Wears Prada close behind at nearly $125 million.

Even when they do badly, they do well

Streep and Roberts are both industry darlings, but not every movie they make is a hit with the critics. Following her huge success with 2001’s Erin Brockovich, Roberts turned out America’s Sweethearts and The Mexican — neither of which was beloved by the critics. Despite mediocre reviews, however, both did well at the box office. The latter earned $66.8 million and America’s Sweethearts, which critics said was “only funny in spurts,” hauled in a respectable $138 million worldwide. Critics also panned 2003’s Mona Lisa Smile, calling it “predictable and safe,” but Roberts’ received $25 million for the role.

A true critics’ darling, Streep rarely receives a bad review for a role. However, not every movie the critics embrace is embraced quite so enthusiastically at the box office. The venerable actress received favorable (and, in some instances, rave) reviews for her work in The Iron Lady, Sophie’s Choice, Doubt and Silkwood, but all four movies failed to reach the $40 million mark in box office receipts. But hey, when you’re pleasing your peers and the industry bigwigs, what is there to complain about?

Julia Roberts reveals the surprising way she selects her roles >>