Beyoncé is passionate about creating equal rights for women and wrote an essay for Maria Shriver about the cause. 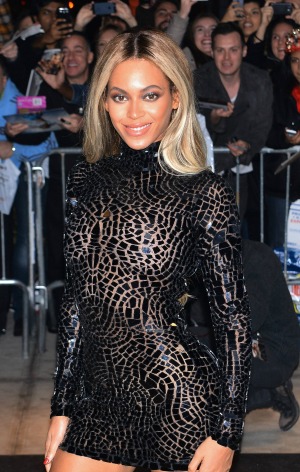 Beyoncé just released a brand new (and surprise) visual album, has a toddler at home and is always there to support her musician/sports agent husband Jay Z, but still finds time to make a difference. The singer was called one of the most-charitable celebs of 2013 and now has added her voice to Maria Shriver‘s The Shriver Report.

Beyoncé shared her feelings about the sexism she sees in the world in an essay for the study. In “A Woman’s Nation Pushes Back from the Brink,” Beyoncé talks about the current inequality between men and women in the workplace.

“We need to stop buying into the myth about gender equality. It isn’t a reality yet,” Beyoncé said, according to The Hollywood Reporter. “Today, women make up half of the U.S. workforce, but the average working woman earns only 77 percent of what the average working man makes. But unless women and men both say this is unacceptable, things will not change. Men have to demand that their wives, daughters, mothers and sisters earn more — commensurate with their qualifications and not their gender. Equality will be achieved when men and women are granted equal pay and equal respect.”

Beyoncé is married to one of the most powerful men in music, but she is just as powerful and outspoken as Jay Z. The 32-year-old is obviously passionate about the cause she talks about in the special.

“Humanity requires both men and women, and we are equally important and need one another,” Beyoncé continued. “So why are we viewed as less than equal? These old attitudes are drilled into us from the very beginning. We have to teach our boys the rules of equality and respect, so that as they grow up, gender equality becomes a natural way of life. And we have to teach our girls that they can reach as high as humanly possible.”

Beyoncé has long been fighting for the cause of gender equality. On her new song, “Flawless,” she includes an excerpt from Chimamanda Ngozi Adichie, a Nigerian writer who says, “We teach girls to shrink themselves, to make themselves smaller. We say to girls ‘You can have ambition, but not too much.'”