Ashlee Simpson is engaged to Evan Ross! The lovebirds broke the news they plan to marry on Monday by posting a sweet and sparkly ring photo on Twitter. 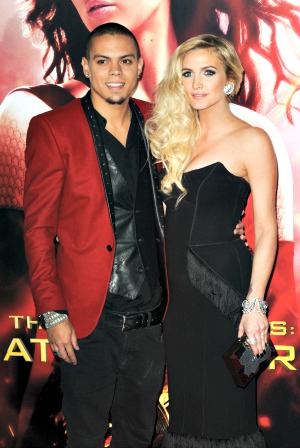 Ashlee Simpson has a brand new engagement ring photo to share with fans thanks to her freshly-minted fiancé, Evan Ross!

Announcing that the actor and musician popped the question and she happily accepted, the mother of 5-year-old Bronx Mowgli Wentz posted the sweet, snuggly image below to Twitter late on Monday afternoon.

Ross, of The Hunger Games: Mockingjay fame and who also happens to be the son of famed songstress Diana Ross, shouted the engagement news from the hilltops as well.

In an exclamation-laden tweet posted at the same time as his future bride’s, the 25 year old shouted, “The love of my life said YES!!!!!!”

My baby love and I are ENGAGED!!! Hallelujah Hawaii !!!!! pic.twitter.com/KVwoltverE

“I’m so in love and we’ve got amazing things going on,” Ross told The Insider at The Hunger Games: Catching Fire premiere in November with the blonde bombshell by his side. He added sweetly, “And we inspire each other.”

The upcoming wedding to Ross isn’t the only love-filled event the Simpson family has to look forward to.

Jessica Simpson, Ashlee’s older sister, is said to be planning a lavish affair to marry fiancé Eric Johnson, who is the father of their daughter Maxwell and son Ace. She’s been engaged since November 2010, however, with no wedding date yet publicly announced.

The marriages will be the second for each sister. Ashlee previously walked down the aisle to say “I do” to rocker Pete Wentz, while Jessica ended her marriage to singer Nick Lachey in 2006.

Who do you think will marry first: Jessica or Ashlee Simpson?