Brad Pitt and Leonardo DiCaprio both have piercing blue eyes, successful careers, handsome good looks and killer bods. How can we possibly pick who’s hotter? We’re not sure, but we’re going to have fun trying. 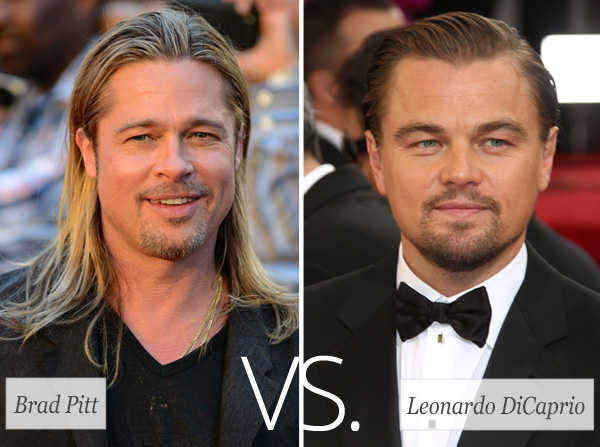 Ever wonder where Brad Pitt got that lazy drawl and laid-back charm? He was born in Oklahoma Dec. 18, 1963 and grew up in Springfield, Missouri. Pitt’s father (Bill) was a trucking company owner and Momma Pitt (Jane) was a family counselor. Maybe that’s where Pitt got the desire to help others and to campaign for the greater good through humanitarian efforts.

50 Spankings are in order for birthday boy Brad Pitt >>

Born 11 years later than Pitt on Nov. 11, 1974 in Los Angeles, California, Leonardo DiCaprio‘s childhood and upbringing was much more Hollywood than Pitts’. He was born an only child to Irmelin DiCaprio and comic strip artist George DiCaprio. At a young age, DiCaprio’s parents signed their child on with a talent agency, probably never realizing that he would become one of the most successful actors of his time.

Leonardo DiCaprio wins a Golden Globe! Does this mean an Oscar win? >>

Brad Pitt: Pitt started out as a model and made a couple of television appearances before starring as Geena Davis’ redneck, renegade hotter-than-hot boy toy in Thelma and Louise. In very little time, Pitt went from “Who’s that guy?” to “Brad Pitt.” Since those days, Pitt has built a career on standout performances in critically acclaimed films like 12 Monkeys, Inglourious Basterds, Moneyball and The Curious Case of Benjamin Button to name a few. Pitt also graces this year’s darling of the award shows, 12 Years a Slave.
Leonardo DiCaprio: Like Pitt, DiCaprio made a couple television appearances before he began to carve out a name for himself in the movie industry. He’s well remembered for his superbly acted roles in What’s Eating Gilbert Grape, The Aviator, Blood Diamond, The Departed, Catch Me If You Can and most recently, The Wolf of Wall Street.

Brad Pitt: If you want to see how well-traveled Pitt is, just look at his fiancé’s left arm, which is tattooed with the birthplaces of their children. Pitt has the means to be seen hosting lavish parties on a yacht, but you’re much more likely to find him alongside his bride-to-be Angelina Jolie in a refugee camp or improving living conditions in New Orleans. Most images of Pitt capture him hustling his crew through an airport or on a family shopping trip.
Leonardo DiCaprio: DiCaprio is living the A-list celebrity lifestyle, and when it comes to the female company he keeps, non-models need not apply. He told OK! magazine, “I try to take life one day at a time. My life changes so quickly all the time anyway. I can’t make those plans, and I don’t really want to make those plans. I am open to whatever comes my way.”

Jennifer Aniston was with Brad Pitt during her awkward years >>

Brad Pitt: How Pitt got in shape for movies like Fight Club and Troy has been a topic of much speculation, but askmen.com says you’d have to be willing to work your abs off to look like Pitt. For starters, you’d have to do 30 minutes of cardio as soon as you get up, with nothing in your stomach. From there you’d have to commit to a series of grueling core exercises and lots of weights. This sounds exhausting — can we just watch instead?
Leonardo DiCaprio: DiCaprio looks like a lean, mean, fighting machine — in and out of a business suit. To get DiCaprio in shape for The Beach, his trainer put him through a series of drills that included running, kickboxing and water aerobics. Again, this is sounding like a spectator sport.

Brad Pitt: “Brangelina” has become legendary for their humanitarian efforts. Pitt combined his love of architecture and his generosity to form the Make It Right Foundation, which is building 150 affordable and sustainable homes for families affected by Hurricane Katrina. With George Clooney, Matt Damon, Don Cheadle and Jerry Weintraub, Pitt is involved with Not On Our Watch, an organization that raises global awareness in an effort to eradicate genocide in places like Darfur.
Leonardo DiCaprio: DiCaprio’s pet cause is the environment and he’s made several films to raise awareness about environmental issues. He is also founder of the Leonardo DiCaprio Foundation which is dedicated to protecting endangered animals and the environment. Recently DiCaprio purchased a racing team to compete in the Formula E world racing series which he hopes will serve to spread awareness about zero-emission cars.

Brad Pitt: Pitt and Jolie have a bulldog named Jacques.
Leonardo DiCaprio: DiCaprio has a pet lizard, frogs and dogs.

Brad Pitt: Mr. Pitt dropped out of college just two credits shy of graduating. While many may have questioned the intelligence behind that decision at the time, Pitt clearly knew what he was doing.
Leonardo DiCaprio: School was never DiCaprio’s thing. He attended high school in L.A. and often cheated. Even then, DiCaprio was too focused on being an actor to care much about school. He landed his first serious role on Growing Pains at the age of 16, where he played a homeless teenager.

Brad Pitt: This may be where the rubber meets the road in this particular debate. Pitt took the long road to find Jolie, but once he did he settled into being a family man — not only retaining his hotness while doing so, but actually amping it up. Having six kids has never looked so good.
Leonardo DiCaprio: If you’re still in that “free-and-happy-about-it” stage of your life, maybe this longtime bachelor and boyfriend of the rich and gorgeous seems hotter to you. Is this serial dater of beautiful models like Gisele Bundchen and Bar Refaeli more about style than substance? Is he so hot it doesn’t really matter?