Amy Poehler and Bono shared a big sloppy kiss at the Golden Globes, making it one of the most awkward lip-locking moments of the show. 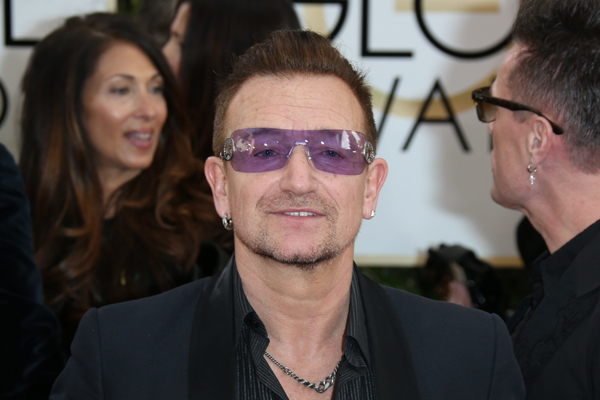 After the announcement was made that Amy Poehler won an award at Sunday night’s Golden Globes, she turned to Bono and laid a big smooch on his lips. Her unexpected wet kiss with the famous front man turned into quite the awkward moment on the show.

As the nominees for Best Actress in a TV Series, Musical or Comedy were read, Poehler, who was up for the award, sat nervously on Bono’s lap as he massaged her back. As if that wasn’t bizarre enough — the comedian’s boyfriend, Nick Kroll, was just a few feet away after all — when her name was called, Poehler turned around and planted a big wet kiss on a very surprised Bono.

The U2 singer was obviously caught off guard by the blond funny woman’s advances, but he was smiling ear to ear nonetheless.

While Kroll may have been stumped about the impromptu kiss himself, he did take it all in fun and posted a funny message on Twitter, warning the Irish crooner, “Hey Bono, watch your back.”

At least, it seemed to be a joke.

Meanwhile, Bono felt much less passionate about another celebrity kiss, which he swiftly managed to dodge, when he accepted his own award for Best Original Song — Motion Picture.

After rapper Diddy called out U2’s “Ordinary Love” as the winning song, Bono and his band happily hugged the presenters. However, when Bono was approached by Diddy, who seemingly made moves to give him a kiss, the rocker drew away and quickly patted him on the back before moving on to the microphone.

But, Bono’s kisses and near-misses were not the only awkward smooching moments at the Golden Globes. Apparently, Julie Bowen and Seth Meyers were also part of the odd kissing incidents that took place on last night’s awards ceremony.