Woody Allen was honored at the Golden Globes on Sunday night, but his former family members were determined to cast a dark shadow over the tribute to him. 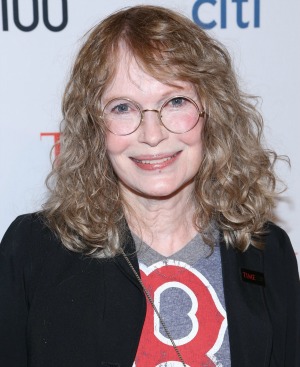 Woody Allen was honored on Sunday night with the Cecil B. DeMille Award at the 71st Annual Golden Globe Awards show for his outstanding work in showbiz.

Allen was not there to accept the award, but actress Diane Keaton accepted it on the director’s behalf.

The Big Wedding star made a speech in Allen’s honor saying, “It’s kind of hard for me to wrap my mind around the fact that 179 of the world’s most captivating actresses have appeared in Woody’s films and there’s a reason for this. The reason is they wanted to.”

“They wanted to because Woody’s women can’t be compartmentalized, right? I mean, they struggle, they love, they fall apart, they dominate, they’re funny, they’re flawed. They are, in fact, the hallmark of Woody’s work.”

“But what’s even more remarkable is that absolutely nothing links these unforgettable characters from the fact that they came from the mind of Woody Allen. And there you have it.”

Keaton, along with many fans, may have sung the Blue Jasmine creator‘s praises, but not everyone was as thrilled with the tribute.

Two people in particular were very unhappy that the critically acclaimed filmmaker had been honored and they are ex-partner Mia Farrow and her son Ronan Farrow.

The mom-and-son team took to Twitter to voice their disdain for Allen and the 2014 Golden Globe Awards tribute, and their tweets clearly reflected just how little they think of the 78-year-old director.

“Time to grab some ice cream & switch over to #GIRLS,” Mia tweeted when Allen’s tribute began to start.

Time to grab some icecream & switch over to #GIRLS

Mia was not done expressing her disgust for Allen and she followed up her original post with two more. She wrote: “A woman has publicly detailed Woody Allen’s molestation of her at age 7. GoldenGlobe tribute showed contempt for her & all abuse survivors.”

A woman has publicly detailed Woody Allen's molestation of her at age 7. GoldenGlobe tribute showed contempt for her & all abuse survivors

“Is he a pedophile ? Read this VanityFair article and make up your own mind”

Is he a pedophile ? Read this VanityFair article and make up your own mind. http://t.co/k2nyrMpjAt

Mia’s 26-year-old son was keen to share his views on the topic, too, and cast a black cloud over the tribute. He wrote, “Missed the Woody Allen tribute — did they put the part where a woman publicly confirmed he molested her at age 7 before or after Annie Hall?”

Missed the Woody Allen tribute – did they put the part where a woman publicly confirmed he molested her at age 7 before or after Annie Hall?

The reason there is no love lost between Allen and his former family is because he has been accused of sexually abusing his adopted daughter Dylan Farrow in 1992 when she was just seven years old.

According to E! News, Dylan had kept her abuse a secret throughout her younger years and only recently did she reveal her traumatic ordeal.

“There’s a lot I don’t remember, but what happened in the attic I remember,” Dylan told special correspondent Maureen Orth in October 2013.

“The things making me uncomfortable were making me think I was a bad kid, because I didn’t want to do what my elder told me to do.”

The Hannah and Her Sisters actress and her son also both retweeted a Vanity Fair story in which Dylan spoke out about the abuse she suffered at the hands of her famous father.

Allen has denied all allegations of abuse and a judge also previously ruled that the charges were inconclusive, but that will never be enough to reconnect him with his family.