Are things heating up with Sean Penn and Charlize Theron? The pair were recently spotted packing on the affection at a celebrity gala. 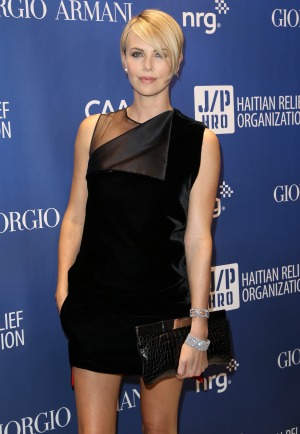 Rumors have been swirling that Hollywood A-listers Charlize Theron and Sean Penn have taken their friendship to the next level and are romantically involved since their New Year’s vacation together in Hawaii.

Since the return from their holiday, the Oscar-winning duo have been spotted on several dinner dates, and fans believe things are heating up between the two.

And now the pair have just added more fuel to the fire. They were spotted looking very affectionate and remained side by side the entire night at the Sean Penn & Friends Help Haiti Home Gala on Saturday night.

According to a source at the New York Daily News, the pair “looked like two teenagers in love.”

“They were hugging each other the entire evening. When a film about Haiti was played, Sean was resting his head on Charlize’s shoulder and was holding her hand and kissing it. It was all very cute,” the source added.

In addition to their loved-up appearance, the actor also credited his South African-born companion with helping him to change his views on guns.

While speaking at the event, Penn did not mention Theron’s name directly but rather referred to her as “a strong woman who happens to be from South Africa” and thanked her for helping him get rid of the guns that were in his home. The guns will be made into an art piece by artist Jeff Koons that will be auctioned off to the highest bidder.

Penn said, “The highest bidder gets every single one of my guns put in the hands of this iconic artist and sculptor… Koons will decommission [and] render inactive all of my cowardly killing machines.”

The star-studded charity event was held at the Montage Hotel in Beverly Hills, California, and other famous faces included Julia Roberts, Diane Kruger, Chris Martin and wife Gwyneth Paltrow, Emma Thompson and a surprise three-song performance from U2, to name but a few.

If the rumors are true, then this will be the Monster star’s first serious relationship since her split from longtime boyfriend Irish actor Stuart Townsend in 2010. And the Gangster Squad actor certainly has a thing for blond beauties. He previously was married to Madonna and Robin Wright, and dated the beautiful Scarlett Johansson for six months before the pair split up in 2011.

What do you think of this potential pair?