It looks like Leo is on track to win an Oscar! Then again, he’s probably heard that before. The historical precedents aren’t exactly in his favor. 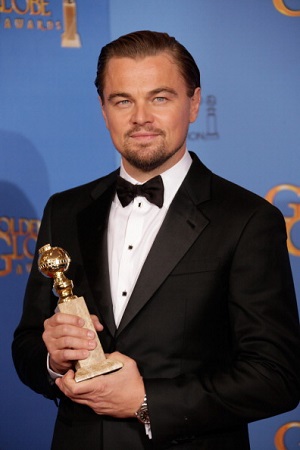 Multitalented dreamboat actor Leonardo DiCaprio won the Best Actor in a Musical or Comedy award at the Golden Globes for his work on The Wolf of Wall Street. We couldn’t be happier for him! Not only is this great news in general, but it also sets him up to win an Oscar.

How’d the hostesses fare? We’ve got the review >>

What are we talking about? The Golden Globes is cool in its own right (namely for the awesome co-hosts), but there’s also an historical precedent that suggests Golden Globes winners go on to become Oscar winners. Most importantly for DiCaprio, 12 of the last 20 Golden Globes Best Actor winners have gone on to take home the Oscar. The predictions don’t stop there, though. The Golden Globes have successfully predicted the Oscar Best Picture winners 11 times in the last 20 years. The Globes predicted Best Picture winners most accurately between 1993 and 2003, when they matched 10 out of 11 times. For the last two years, in fact, the movies that won Best Comedy (The Artist in 2012) and Best Drama (Argo in 2013) have gone on to win the Best Picture Oscar.

The scoop on the soggy Golden Globes red carpet >>

This isn’t Leonardo’s first Globes win, however. DiCaprio previously won in 2005 for his role in The Aviator. As a matter of fact, in the last 20 years, our boy has been nominated for 10 Golden Globes. His first nomination? Oh, just a little movie from 1994 called What’s Eating Gilbert Grape? Interestingly enough, his win for The Aviator was one of the few times the Academy got it wrong. While he was nominated for his role in the film, he didn’t go on to win the Oscar. That year, Jamie Foxx won for his role in Ray.

For all the latest TV and awards show news, sign up for our newsletter! >>

To date, DiCaprio has never won an Oscar. He’s been nominated on three occasions for his roles in What’s Eating Gilbert Grape?, The Aviator and Blood Diamond, however. Hopefully, this Globe win will help seal the deal, and we’ll see DiCaprio take home the Oscar in March.