Can you imagine wearing a $20,000 gown and walking down a wet red carpet? That’s exactly what the stars had to deal with at the Golden Globes. 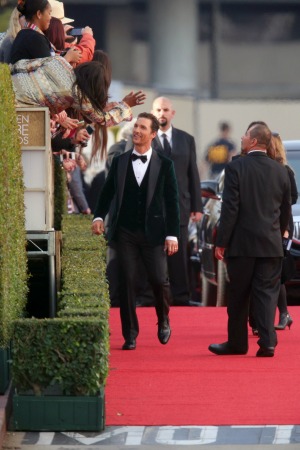 Was it a sewage leak, or was it a sprinkler system? It doesn’t matter, because the red carpet was soaked for the 2014 Golden Globe Awards.

When the news broke shortly before 3 p.m. PST, the media delivered conflicting reports on what had really happened to make that glamorous red carpet so soggy. According to TMZ, a sewage pipe at The Beverly Hilton burst around 12:20 p.m. PST. According to The Hollywood Reporter, a large lighting rig that was set too close to a fire sprinkler accidentally set the latter off.

The water reportedly hit cameras already in place as well as the red carpet. The emergency required the services of the Beverly Hills Fire Department. The firemen came armed with air blowers and wet vacuums within a matter of 15 minutes to attend to the issue.

Even E! News initially stated it was a burst pipe, with correspondent Catt Sadler sharing, “A pipe has appeared to totally burst and there is water gushing, literally everywhere in the position of where all of the international press — everyone has moved out of the way. Rain was not expected in L.A. today, but we’ve got a little flooding!”

By the time the red carpet began, the carpet was still wet and there were areas with wet puddles. Ryan Seacrest shared several photos of the damage with his followers on Twitter. It showed the firemen hard at work trying to get the media area picture-perfect.

It didn’t seem to affect the Golden Globes preshow telecast, and there weren’t many mentions of drenched trains or ruined shoes. It appears everyone in Hollywood understands that the show must go on.