Amy Poehler and Tina Fey returned to the Golden Globes and proved that they just continue to get better and better each year. 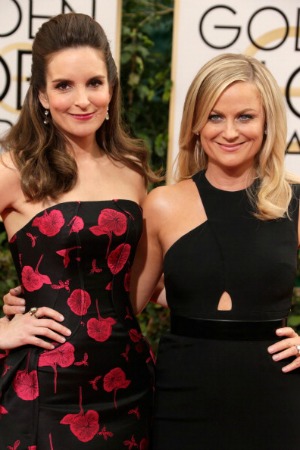 Tina Fey and Amy Poehler took the helm of the Golden Globes for the second year in a row, and they did what they do best. The actresses are both comedic geniuses on their own, but together, they make watching an award show an event you look forward to for a whole year.

The show started with a speech from Fey and Poehler that included pretty much the entire audience, but not in the negative way that had been done by previous host Ricky Gervais. The friends teased the audience members about their movies, their lives or their hair, but it was all in the name of fun.

“Gravity is a movie that proves that George Clooney would rather float away into space and die than spend one more moment with a woman his own age,” the girls joked, to Sandra Bullock‘s delight.

The list of jokes is long, but they ended their opening speech by saying, “We’re going to get this show done in three hours, or as Martin Scorsese calls it, Act 1.”

Fey and Poehler have known each other for years, starting out in Chicago, and they eventually came to Saturday Night Live together. They hosted the Golden Globes in 2013, and they recently announced they would be hosting both the 2014 and 2015 shows.

At the Golden Globes, Amy Poehler also won an award for best actress for her role on Parks and Recreation. As the nominees were announced, Poehler stayed in her hosting character. As her name was announced, U2’s Bono was giving her a back rub. When her name was called as the winner, she attempted to make out with the singer.

Poehler and Fey will return for more Golden Globes, and chances are, they will just keep getting better each year.