Not sure who that dude with the messy hair was? That’s Alex Ebert from Edward Sharpe and the Magnetic Zeros. 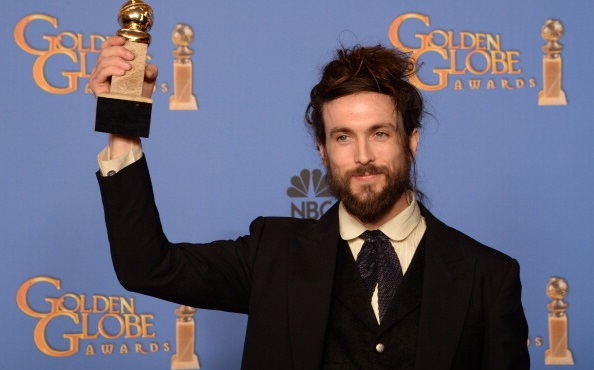 Alex Ebert isn’t the kind of guy you normally see at the Golden Globes, but he stormed the stage this year when he took home the prize for Best Original Score for the movie All Is Lost.

Check it out! The full list of Golden Globe winners >>

The film relies almost entirely on Robert Redford, who plays an unnamed sailor. It’s a lot like Tom Hanks’s Castaway, but with a boat. The yachtsman must fight against a hole in the hull, a terrible storm, a failed engine and dwindling supplies in an effort to make it to shore alive. With so little conversation and dialogue, a movie like All is Lost must rely heavily on its soundtrack. This year, that directorial choice just happened to turn Ebert into a big winner.

But… who is this dressed-up hippie?

Ebert is best known for his work as lead singer of the folk-rock band Edward Sharpe and the Magnetic Zeros. With a rotating cast of up to 12 members, the Magnetic Zeros make music that not only fills rooms but perfectly works in the biggest of arenas. With their laid-back clothes and love of flitting around the stage banging tambourines, the Magnetic Zeros evoke thoughts of the hippie and psychedelic movements of the ’60s and ’70s. Ebert looks like Jesus, and the way fans cling to his music for hope and inspiration, he seems a lot like him, too.

Edward Sharpe and 5 other folk bands worth loving >>

Even if you’ve not heard of Ebert or the Zeros, you’ve definitely heard a couple of their singles. Their song “Home,” off their second album, was featured on the 2010 commercial for the Ford Fiesta. It also appeared in a commercial for the NFL. Their newest, self-titled album was released last summer and was partially backed by the Gentlemen of the Road record label, which was founded by the members of former touring mates and Grammy winners Mumford & Sons.

Hopefully, we will see a lot more of Ebert and his band of lovely singing hippies at future award shows!

For all the latest TV, music and award show news, sign up for our newsletter! >>