It’s confirmed! While it might have been the worst-kept secret, Kerry Washington has now showed off her baby bump at the Golden Globe Awards. 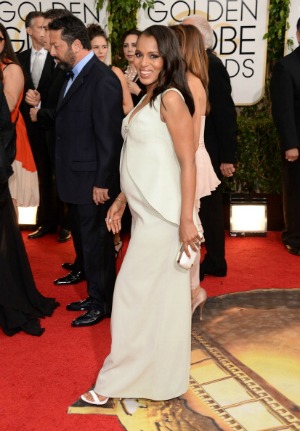 She hadn’t confirmed it until now, but Kerry Washington is indeed pregnant. She arrived on the red carpet with a beautiful mom-to-be glow and an incredible gown that accentuated her baby bump.

She told Ryan Seacrest during E!’s red carpet pre-show, “I have the best date of the night — my little accessory.”

The 36-year-old Scandal star is expecting her first child with her new husband, former NFL star Nnamdi Asomugha. In fact, the ABC series’ schedule is being shortened this season to accommodate her maternity leave.

At the Golden Globes on Sunday, Washington wore an Alexander Wang gown that was simple and sophisticated. She has become one of the actresses whom designers most want to dress for the red carpet, so Wang was a big winner in the fashion-design world.

The ABC star has been quite mum about all of the changes in her personal life. She addressed the topic in an interview with Glamour for its Oct. 2013 issue.

Washington shared, “I’ve had earlier times in my career when I did talk about [my personal life]. I was on the cover of a bridal magazine. But I couldn’t just turn around and say, ‘I only want to talk about the good stuff but not the bad stuff.’ So I just thought, ‘OK, no more.'”

This was the most forthcoming Washington has been in ages, but it was obviously hard to ignore the pregnancy bump. It’s clear that she’s happy with her current stage of life — even if she’s not going to talk about it.