Jacqueline Bisset showed up at the Golden Globes obviously not expecting to win. But she did, and she gave a random, rambling and unprepared speech. 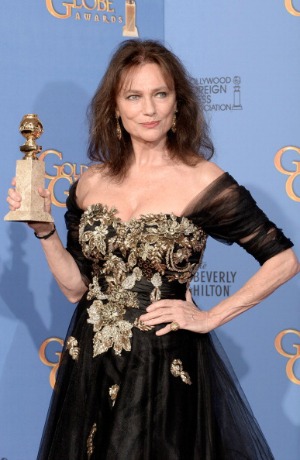 Jacqueline Bisset was a surprise winner at the 2014 Golden Globes, but it appeared no one was more surprised than she was. That surprise led to a very awkward acceptance speech, including a moment that was not caught by the censors.

Bisset won her award for BBC’s Dancing on the Edge, and it was the actress’s first win, despite five nominations.

As the nominees for the award were announced, Bisset looked like she didn’t think she had a chance to win. And as her name was called, she sat in her seat, obviously stunned at hearing her name called.

The 69-year-old told the crowd that she was nominated for “most promising newcomer” in 1969 but had not won any Golden Globes until the 2014 award show.

The win came as such a surprise because Bisset was against some of Hollywood’s hottest young stars, including Hayden Panettiere, Monica Potter and Sofia Vergara.

Bisset’s speech was not nearly as compelling as her performance in the film, though. She couldn’t stay on point, and she talked well past when the music began playing. The topics ranged from her early career to her co-stars, but it didn’t seem like she ever had any idea of what she was actually saying.

At one point, Bisset was silenced by the censors, but an “oh s***” slipped past, and at least part of it made it onto TV.

Bisset didn’t begin to thank anyone until well after the music began playing.

She finally said, “I love my friends. I love my family.”

She seemed frustrated during the entire speech, as if she had no idea how to say what she really wanted to say.

The awkwardness of Bisset’s speech may be mostly due to her surprise, but the legendary actress may be looking back at her Golden Globes speech wondering what she could have been thinking.