Did you catch Amy Poehler and Tina Fey’s hysterical opening bit for the 2014 Golden Globes? We’ve collected all the best quotes! 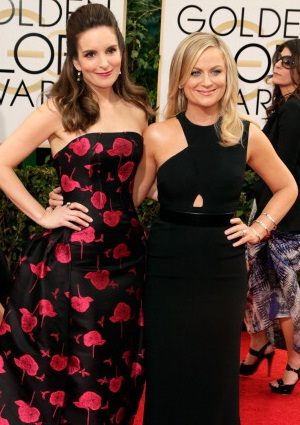 Amy Poehler and Tina Fey continue to be the funniest girls on the planet, and they nailed their opening. We watched through giggles and tears to collect the very best jokes for you.

“Because it’s Hollywood, and it kind of works, they’ll just keep doing it until everyone hates it.”

“No offense to the nominees last year — this year’s legit.”

“Matt, on any other night, in any other room, you’d be a big deal, but tonight — and don’t take this the wrong way — you’re basically a garbage person.”

Tina: “I believe Amy’s here tonight.”
The camera shoots to Jennifer Lawrence.
Amy: “She was fantastic, amazing, radiant. It’s hard to believe she’s a 42-year-old mother of two.”
Tina: “I heard she’s difficult to work with.”
Amy: “Yeah, she’s a straight-up b****.”

On Gravity: “It’s the story of how George Clooney would rather float away in space and die than spend any more time with a woman his own age.”

On Matthew McConaughey: “For his role in Dallas [Buyers Club], he lost 45 pounds — or what actresses call being in a movie.”

“Masters of Sex is the degree I got from Boston College.” (high fives)

“We’ll get the show done in 3 hours — or what Martin Scorsese calls, ‘Act One!'”

For all the latest TV, movie and award show coverage, sign up for our newsletter >>