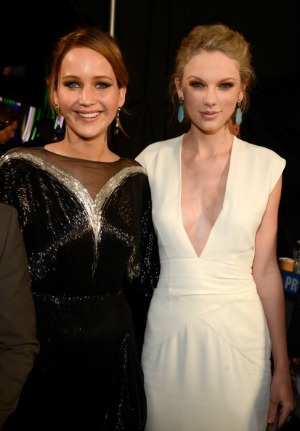 Jennifer Lawrence and Taylor Swift both showed up at the Golden Globes on Sunday night looking as they normally do — amazing. But the stars, as different as they may be, have become unlikely friends.

Jennifer Lawrence has become the queen of photobombs in recent years, and the 2014 Golden Globes helped her keep that title. As Taylor Swift was being interviewed on the red carpet, Lawrence began to creepily creep up the staircase toward her.

“I was going to come in and push you down the stairs,” Lawrence joked as she became a part of Swift’s interview (via E! News). “I was like, she’ll crack up. She would really love that.”

The epic photobomb quickly became an epic GIF that spread across the internet.

Lawrence admitted she is a big fan of Swift’s, saying she was so impressed by Swift’s performance at the Country Music Awards.

“Oh, my god, I freaked out over the CMAs,” Lawrence said. “I sent her a text message that was like six inches long.”

Swift said the text was amazing and that she “was reading it like, this is the most heartfelt text I’ve ever gotten.” But Lawrence can’t remember exactly what she said, only that “she was just so incredible.”

And Swift is a huge fan of Lawrence’s, too.

“American Hustle, I was doing the same thing,” she explained. “I wanted so badly to send a novel text message.”

Jennifer Lawrence reveals why she fell at the Oscars >>

The two have apparently become great friends in recent years, but Lawrence said she hasn’t yet been to one of Swift’s concerts, but only because “she’s never invited me.”

But Swift disagreed, saying, “I have invited you so many times.”

Jennifer Lawrence wasn’t the only star on the red carpet who is a fan of Taylor Swift’s. Modern Family‘s Sarah Hyland was also out there, and she told Giuliana Rancic she was excited to “dance and party the night away” with her friend Swift.

24 hrs ago
by Reshma Gopaldas