Daphne and Bay both find themselves forming friendships with new people, Kathryn and Angelo keep secrets from the ones they love and Toby tries to find a new purpose in “Drowning Girl.” 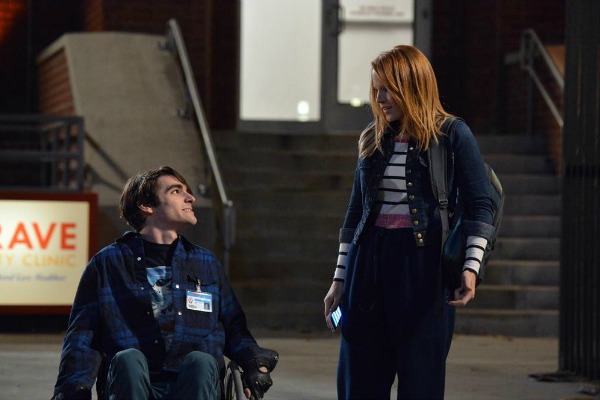 When Daphne was making threats to the senator in the last season of Switched at Birth, I wonder if she ever thought those actions would have led her to where she ended up in this episode. Granted, we didn’t get to see a lot of her actual community service work at the clinic, but the one run-in she had with the very grumpy doctor, plus John’s very apparent feelings on the matter, seemed like enough to discourage her from ever considering something like that again. Of all the consequences from her mistake, John’s response was by far the worse. It was almost as if, because she was always the “good one,” it hurt him even more to find out what she did. I’m sure their relationship can be repaired, but I have a feeling it will take some time.

Bay and Emmett together again? New Switched at Birth promo >>

I was glad that Daphne and Toby got to bond a little bit in this episode, though, because they both sure needed a friend. In my review of the Season 2 finale, I talked about how hard I had been on Toby all last season, but that was mostly due to the fact that he was basically grumpy through the whole thing. When he and Nikki fought their parents and got married, I felt a spark of hope that doing things their own way would lead them both in a whole new direction. Well, I was half right. Nikki certainly went off in a new direction, but Toby was once again sad and mopey. Come on show, really?

On the brighter side, I did enjoy the story involving the new students at Carlton. At first, I wasn’t happy to see that Carlton got dumped with kids who apparently had no desire to learn and who wanted only to disrupt classes and make it impossible for other kids to learn. Once we found out more about the kids, I saw it as an opportunity for all of them to learn from each other. I’m curious to see how the story plays out.

Another thing I really enjoyed in this episode were the new friendships that were forged with so many of the characters. Right now, I can’t see the relationship between Bay and “Tank” going beyond just a friendship, but I really like how different he is from anyone else in her life. He’s big and goofy, but also nice and sweet and very truthful. Daphne’s new friend Campbell is also a great guy and I love how he hasn’t let an accident slow him down from doing what he wants to do. He seems like he’ll be a much better influence than Daphne’s last boyfriend. Finally, I thought Kathryn’s new friend Renzo was hilarious, but I am a touch worried about her lying to John to go hang out with him. I understand that she wants to have a part of her life just for herself, but I think she might have first tried telling John that rather than going straight to a lie.

Another couple that could’ve used a little more truth in this episode was Angelo and Regina. Just as I was enjoying them being a couple again, he went and snapped at her about money and then lied about why he did it. At this point, I’m just going to sit back and wait for all the fireworks that are sure to come from all the fibs that are flying back and forth. I wonder which ones will be the biggest?

John telling Toby to stock his own fridge. That was harsh, but he did have a point.

Sandra Bernhard as the art teacher.

Finding out all of the hazing rituals that Tank had to go through.

Kathryn’s new friend telling her that her legs were “fierce.”

“Tap is like cheerleading for adults.” — This guy is making me want to join a tap class.

Campbell saving Daphne from the very mean doctor at the clinic.

“It’s better than ‘quack.’ You could’ve been named ‘quack.'”

Daphne asking Campbell if he meant his lap when he offered her a ride.

Daphne breaking down and telling Toby she was scared John would never forgive her. That broke my heart, especially when she was talking about kids getting thrown out of their homes.

Tank stopping a very drunken Bay from going up to Cliff’s room.

Daphne and Toby bonding over both of their lives sucking at the moment.

What did you think of the Switched at Birth Season 3 premiere?