There must be something in the water, because Pamela Anderson’s the latest celeb to tie the knot. She has confirmed that she’s off the market for good. 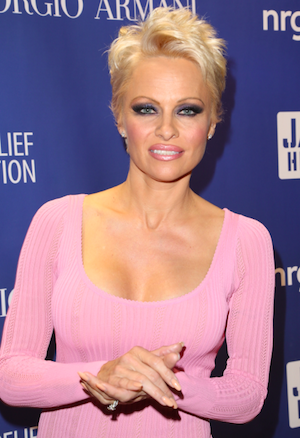 This weekend, Pamela Anderson announced some shocking news: The model and actress has gotten married. Not only did she secretly wed, but she wedded ex-husband Rick Salomon. Anderson and Salomon were previously married back in 2007.

Pamela Anderson stuns with her new pixie ‘do >>

When asked if she and Salomon were married, she replied, “Yes. We’re very happy. Our families are very happy and that’s all that matters.”

Robin Wright and Ben Foster are getting married >>

For the most part, their reconciliation was kept under the radar. A few months ago, she acknowledged that they’d reunited, but she didn’t indicate that she had marriage on the brain. This will be the fourth time both Anderson and Salomon have gotten hitched.

Back in October, Anderson appeared on the Ellen DeGeneres Show and spoke a little about her and Salomon’s relationship.

“I say we’re best friends… with benefits,” she said. She described their reunion as “recycling,” but all joking aside, she declared, “I’m very happy. We’re happy. He’s a great guy.”

Congrats to the newlyweds!

What do you think of Anderson and Salomon getting remarried?