The past week has been a gift to Outlander fans, what with all of the new information revealed about the Starz original series. Let’s take a look! 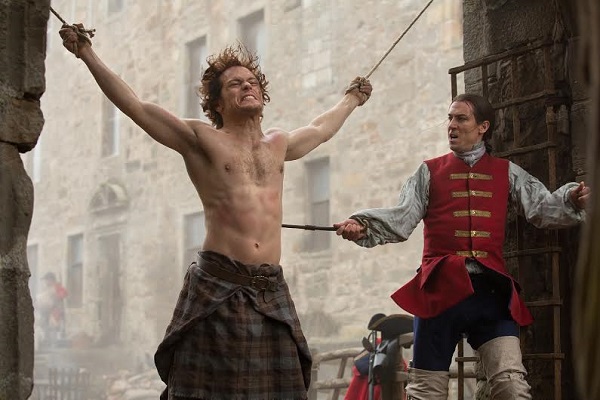 Unless you’ve been living under a rock for the past 23 years, you have heard of Diana Gabaldon. She wrote a series of books that have become known worldwide, and Starz is adapting them for their new series, Outlander — which is also the name of the first book in her series.

The Mountain returns to Game of Thrones >>

The series will focus on a wartime nurse from the 1940s named Claire Randall (Caitriona Balfe), who finds herself transported through time to 18th century Scotland. There, she meets and eventually falls in love with Jamie Fraser (Sam Heughan).

Outlander is being written and executive produced by Ron Moore, who is known for Battlestar Galactica and several of the Star Trek series. He recently spoke to Entertainment Weekly and explained the tone that the cast and crew are trying to set for the series.

“I think what we’re going for overall is we’re trying to deliver an authentic period piece,” Moore said. “We’re not trying to reinvent the 18th century and make it cool for modern audiences. There’s a temptation to make period pieces look like a costume drama, where everything is very clean and beautiful. We’re going for a rougher, grittier feeling to what life was like back then.”

At the Television Critics Association Press Tour, Gabaldon revealed that the series will open differently from how the book opens. That’s because Moore pitched something to her about Claire.

“You need to appreciate her immediately,” Moore told her.

The new scene shows how competent and resilient she can be right from the start.

You can also expect a lot of sex and violence in the series, just as in the books. Notably, there’s a memorable scene in which Claire is physically punished by her lover, Jamie.

“It’s in the book and it’s in the show,” Moore says. “It’s certainly an explosive scene. It hasn’t been shot yet, it’s down the road a bit. It’s a shocking moment, but it’s an important part of the development of the characters and we’re going to go for it.”

To show the fans how much all of their support means to the network, Starz threw an appreciation event at which they showed the first trailer of the series. Fans also received pocket Jamie standees and other items that many guests shared via social media. While we can’t pass on any of those goodies, we can share the trailer. Enjoy!