Robin Wright and boyfriend Ben Foster are taking the next step. Multiple sources are reporting that the couple is engaged. 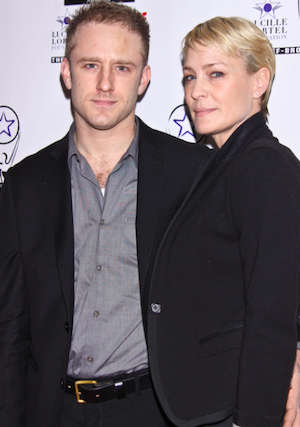 Love is in the air for Robin Wright and Ben Foster. The actors, who co-starred in the 2011 film Rampart, are engaged. When the couple made an appearance at Diane von Fürstenberg’s “Journey of a Dress” party on Friday, Wright had a finger full of bling.

The pair and Wright’s daughter, Dylan Penn, were all on hand at the event. A source confirms to E! News that the 33-year-old Foster and 47-year-old Wright are ready to wed. This will be the third marriage for Wright, who was previously married to Dane Witherspoon from 1986 to 1988 and to Sean Penn from 1996 to 2010. Perhaps the third time will be the charm for the actress?

Both Wright and Foster are thriving in their personal and professional lives. Foster currently stars in the critically acclaimed drama Lone Survivor alongside Mark Wahlberg. He also won the coveted role of Lance Armstrong in the upcoming biopic about the controversial cyclist.

House of Cards Season 2 returns with even more sex, corruption >>

Meanwhile, Wright has pulled double duty on the small and big screens. She recently appeared in The Girl with the Dragon Tattoo, Adore and the Netflix drama House of Cards. Her performance in the latter has earned her both Primetime Emmy and Golden Globe nominations.

This engagement is just the icing on the cake. Wright and Foster reportedly began their romance sometime in early 2012. This is the first high-profile relationship for Wright following her divorce from Penn, while Foster previously dated actress Zoe Kravitz.