Best known for her role as Starbuck in the cult-favorite TV show Battlestar Galactica, the bad-a** actress has been compared to Linda Hamilton and Sigourney Weaver for playing such strong, powerful characters, and the comparison fits like a leather glove. We sat down with Katee to find out what it takes to be a tough chick. Her answer may surprise you. 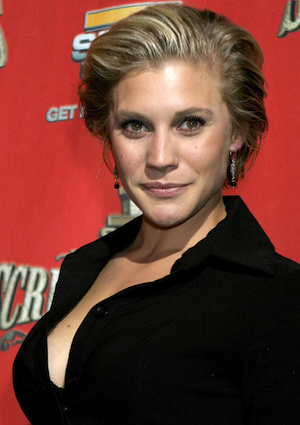 Just watch the trailer for Riddick and you’ll be blown away by Katee Sackhoff’s intensity. We wanted to know just what’s behind this beauty’s strength.

“A tremendous amount of fear,” she said. “I just try to play these characters to inspire myself to be stronger. I don’t think that I’m inherently a tough girl, though I do some tough things like ride a motorcycle.”

Is Vin Diesel breaking the macho mold for musicals? >>

She says the biggest mistake actresses make when they play strong women is, “To make them impenetrable, and I think that’s false. The strongest people are also the most vulnerable, actually.”

Wait, she’s not tough but she rides motorcycles? She sure sounds brave to us. We asked her why she likes riding the steel horse.

“I love it, it’s kind of like SCUBA diving, you’re trapped in a bubble and no one can touch you or talk to you. It’s just incredibly cathartic and peaceful. The trade-off of joy I get far outweighs the risks.”

With the upcoming release of Riddick on DVD, we asked Sackhoff to describe her bounty-hunter character. “Dahl is just a crazy bad-a**. She’s No. 2, knowing she shouldn’t be in charge, but is strong enough to take orders. Dahl does that very well and makes a fantastic soldier.”

We also asked her about working opposite Vin Diesel. “Vin is incredibly focused and determined, he brings 110 percent to work every day. He really took it upon himself to give the fans what they wanted and make them proud.”

We asked why it was so important for the Longmire star to bulk up and add muscle for her role in Riddick. She claims she just wanted to fit in with the rest of the cast.

“Every time I heard they cast a new person in the movie, it was always this massive, big guy. Dahl was written to be very intimidating. My biggest fear was to show up on set and be dainty.”

To gain muscle mass, Sackhoff told us she and her fitness trainer shifted from cutting weight to “eating everything I could and lifting as heavy as possible to pack on a lot of muscle.”

Her goal? “To look the same, but add two sizes,” she said, admitting it wasn’t easy to do. But she did have a secret weapon: Peanut butter fudge from Whole Foods.

“I had to consume like 5,000 calories a day. I had my manager ship fudge to Montreal and just ate it nonstop.” Wow, that’s a lot of fudge!

Recently, the actress commented that the producers of a Wonder Woman TV pilot obviously hadn’t seen her work when they said she’s “not the right type.” We wanted to know how Sackhoff deals with Hollywood’s need to stereotype women.

“It is what it is. When I made that comment, it wasn’t out of frustration or anger. I was just saying this happened and you move on. I have mad respect for David Kelley I think he’s amazing. Art is completely subjective. When you’re 5 feet 6 inches and a blonde in this business, you’re not Wonder Woman. And it’s okay, it’s an opinion.” Adrianne Palecki was cast as the Amazonian superheroine but the pilot failed to make it on air.

Wonder Woman series may become reality after all >>

What can we expect from Sackhoff’s next film Oculus? “It’s got twists and turns, and I’m very proud of it.” But that’s not all she has in the works, Season 3 of her A&E show Longmire airs in June.