Justin Bieber is accused of egging his neighbor’s house and is currently being investigated for vandalism. 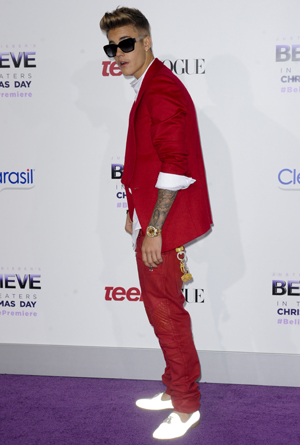 Justin Bieber seemed to be up to his devious ways again after a neighbor claimed the pop prince viciously egged his home Thursday evening.

After catching the assault incident on video, Bieber’s neighbor is accusing him of defacing his home with about 20 eggs. While the attack was still happening, the neighbor had his 13-year-old daughter call the cops as he was recording the whole commotion.

Was Justin Bieber not joking about retirement?>>

TMZ has acquired the clip, which is very dark, but clearly shows the neighbor and Bieber yelling back and forth at each other as the attack is happening.

The two go on yelling at each other as the daughter is heard in the background, sounding very scared and exclaiming, “Oh my god!” Then, when her dad sends her in the house to call the police, she can be heard reporting the disturbance on the phone.

The ruckus started when the neighbor heard something hitting the house at about 7:30 p.m. on Thursday. He went out to his balcony to check out what was going on, and that’s when he saw Bieber pelting eggs at his front door. When he yelled, “What the hell are you doing?” the Biebs reportedly launched another egg in his direction.

Justin Bieber annoys his neighbors with a raucous party >>

After their screaming match, Bieber threw a few more eggs at the angry neighbor’s house, and then ran back to his own home.

The victimized neighbor, who’s had multiple showdowns with Bieber in the past, claims damage to his home exceeds $400. This means Bieber could be facing a felony charge against him if he’s found guilty of the egg-bombing deed.

Perhaps in an effort to help make himself look innocent, Bieber posted a series of cute photos on Instagram today that show him sweetly posing with his little siblings.

Meanwhile, Bieber’s reps have not responded to calls inquiring about the egg situation.