Kate Upton is the “it” supermodel of the moment, but she’s so much more than you see in photos. She opens up about her career, her motivations and her critics. 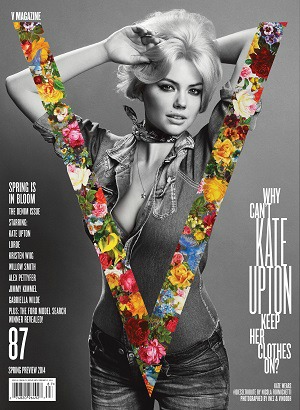 V magazine may have a little crush on Kate Upton. Unfortunately, they’ll have to get in line. The supermodel appears on the cover of this month’s issue, and it will be the fifth time she’s been in the magazine.

Upton may be the desire of plenty of men (and some women), but she’s a true professional.

“I now suffer from Catalog Tourette’s,” Upton joked to the magazine “I can switch a pose like it’s no one’s business. As soon as I hear a camera click, I’m on. I tell you, it’s a serious nervous condition.”

The 21-year-old has scored herself two Sports Illustrated: Swimsuit Edition covers, and is focusing on her career right now. She’s at the top of her game, but doesn’t compare herself with anyone who might be considered her competition.

“I don’t compare myself with other models,” she explained. “For me, modeling is really about competing with yourself, becoming the best you can be.”

That doesn’t mean Upton is without her critics. In 2012, the director of the Victoria’s Secret Fashion Show said she doesn’t see anything special in Upton, claiming she’s “like a footballer’s wife, with the too-blond hair and that kind of face that anyone with enough money can go out and buy.”

But as Upton’s success continues to grow, she’s proving all her critics wrong — and that success appears to be equal parts good looks and motivation.

Although photographers love to put her in as little as possible, Upton said she still works hard at all that she does. She admitted she makes “all of [her] covers unique, even when in a bikini,” but she seems to truly enjoy what she does. V asked her why she “can’t keep [her] clothes on” and she responded, “Because I don’t want to!”

But in the end, her success is about far more than just her body. Upton has proven she’s smart and dedicated.

“My life isn’t as manufactured as people think,” Upton said. “I have dreams and I express them. But it’s a business and you have to be a good observer if you want to do your job properly.”

Kate Upton’s issue of V magazine hits newsstands on Jan. 16. You can see her next in The Other Woman along with Cameron Diaz.