Bobbi Kristina Brown has some exciting news she wants to share with the world: She just got hitched to her adopted sibling Nick Gordon. 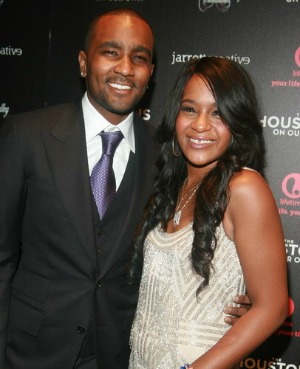 The daughter of the late Whitney Houston, Bobbi Kristina Brown, has been very busy lately, and it appears she’s gotten married to her adopted brother and long-term love Nick Gordon.

On Thursday, the 20-year-old was filled with happiness and decided to share her news with fans on Twitter. She tweeted, “#HappilyMarried So #Inlove if you didn’t get it the first time that is. (sic)”

The tweet was accompanied by a picture of Brown and her beau’s hands together as they showed off their wedding rings, with Brown sporting a rather impressive custom-made Neil Lane bauble.

This news may be strange to many because Brown shares a sibling bond with her husband, although not a blood relation. Houston, the late “I Will Always Love You” singer, informally adopted Gordon when he was 12 years old.

The couple’s relationship has not been easy as they have faced a lot of criticism from people who deem their relationship wrong.

The pair originally announced their engagement in October 2012 on their Lifetime reality series The Houstons: On Our Own but split up soon after because of the unwanted attention they were receiving.

According to the Daily Mail, Brown was angry about the whole incident at the time and let the world have a piece of her mind on her Facebook page. She wrote, “Yes, we me nick are engaged. I’m tired of hearing people say ‘eww your engaged to your brother’ or ‘if Whitney was still alive would we be together or would she approve of this.'”

However, even the worldwide disapproval couldn’t keep this pair away from each other, and their love defied all odds as they reconciled in July 2013.

No matter what anyone may think of their rather unconventional love, there is no denying that the pair are committed to each other and are happy.

Tell us: What do you think about the couple’s marriage?