The 100th episode may mark another milestone in The Vampire Diaries‘ history. It may be the episode where Klaus and Caroline finally get together! 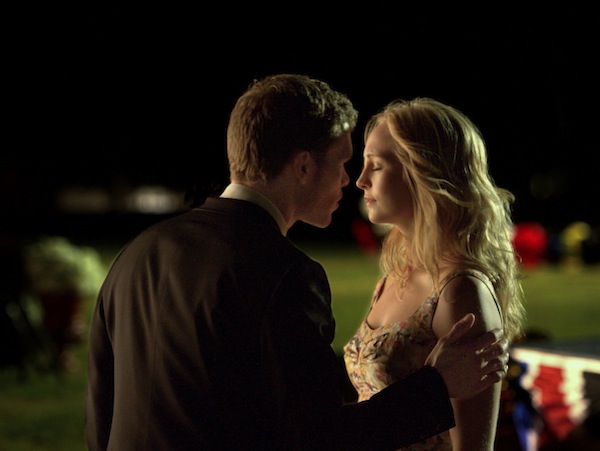 The Vampire Diaries is setting the stage for Caroline (Candice Accola) and Klaus (Joseph Morgan) to finally do more than have some serious chemistry. The show will return Jan. 23 on The CW, not just with a new episode, but the 100th episode. And wouldn’t it just be even more of an epic occasion if they sealed it with a much-sought-after kiss?

Caroline has long spurned Klaus’ advances, and the two seemed to be done for good when Klaus moved to New Orleans and got his own show with The Originals.

Now we know there’s still hope, and it looks like the writers won’t be letting us down.

It has been confirmed that Klaus will be returning to Mystic Falls at some point during Season 5. Now, The CW is raising even more speculations about the potential couple’s future by releasing a synopsis for the show’s return:

As she faces a new crisis, Katherine (Nina Dobrev) remembers the traumatic night in 1490 when she gave birth to the daughter who was immediately taken from her. Stefan (Paul Wesley) lets Elena, Caroline and Bonnie (Kat Graham) know that Katherine’s health has taken a turn for the worse, while Damon (Ian Somerhalder), Matt (Zach Roerig) and Jeremy (Steven R. McQueen) discuss some of Katherine’s most notorious moments. Nadia comes up with a frightening plan to protect her mother, and Stefan and Elena are forced to help her. Meanwhile, Caroline is mortified when she realizes she forgot to fill Elena in on the latest shocking gossip, then indulges in a little scandalous behavior of her own. Finally, Elena and Katherine share an unexpected moment of connection.

Everyone gets wrapped up in the fact that Katherine is dying so when Klaus comes strolling into town, Caroline doesn’t exactly have the chance to break the news. He probably shows up on campus while Elena and the rest of the gang are already at the Salvatore house trying to devise a plan to save Katherine. After Nadia enacts a plan to save mommy dearest, Caroline and Klaus finally have their moment!

Another reason we think Klaus will be heading back to Mystic Falls so soon is that The Originals returns with new episodes Jan. 14, which gives the show two new episodes ahead of The Vampire Diaries‘ return. That’s more than enough time to give Klaus a good plot-driven reason to return to Mystic Falls and Caroline.

Although The Vampire Diaries is keeping a tight lid on just exactly when Klaus will return, we think the 100th episode is the perfect occasion.

Do you think Klaus and Caroline will finally get together in the 100th episode of The Vampire Diaries?