Wahlburgers restaurant not only serves hot, juicy hamburgers, entrance to their reality television premiere is the hottest ticket in Boston. 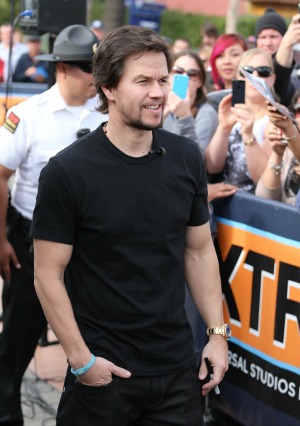 Bostonians just can’t wait to get their hands on a serving of Wahlberg meat, and are willing to fork over big bucks for a chance to be with famous brothers Donnie and Mark Wahlberg for the upcoming Wahlburgers television show premiere.

Less than an hour after the $100 tickets to the premiere event went on sale Wednesday, they’d all been gobbled up by fans thirsty for the chance to rub elbows with the owners.

“It’s all about the Dorchester Youth Collaborative, and the money is going to benefit them, so I’m really happy for them,” Paul Wahlberg, chef and one-third of the Wahlberg brothers who own Wahlburgers, explained of the ticket sales.

Adding that the $2,500 raised is going to a place close to their hearts, Paul continued, “It’s a program that Mark [Wahlberg] has been affiliated with for a long time. We’re very excited for it, and they were excited as well. It’s a great program; what they do over there is amazing.”

Who knew? Mark Wahlberg is a real church boy >>

Wow, those went quickly. Our #Wahlburgers TV show premiere party is sold out! We’ll see all the lucky ones who got tickets on the 22nd!

Curious about the Wahlburgers‘ menu? Those lucky enough to be in the vicinity of the restaurant have the chance to feast on BBQ bacon burgers (Donnie’s favorite), the classic burger (Paul’s pick) and a Thanksgiving burger (Mark’s go-to grub). Sides include “mom’s macaroni” and sweet potato tots.

Aptly-named mixed drinks for the over 21 crowd have been dubbed wahlcoctions and a Wahlbrewski Pale Ale is also available.

Will you be tuning in to sample the Wahlburgers premiere?