Emma Thompson has played numerous lesbian characters, always opening herself up to rumors. But she finally revealed, if she were gay, who would be her first choice. 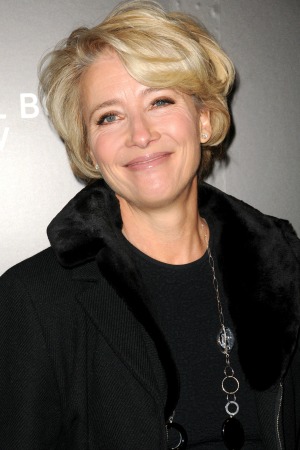 Emma Thompson‘s newest role has her in a Disney movie — sort of. Saving Mr. Banks is the story of P.L. Travers, the author Mary Poppins, and how Walt Disney convinced her to let him make the movie. Surprisingly, the movie delves into Travers’ sexuality, and it isn’t the first time Thompson has played such roles.

Back in 1997, she appeared on Ellen, playing an American, and lesbian, version of herself. While the move was groundbreaking at the time, Thompson didn’t think anything of it.

“I wasn’t thinking about myself so much as the profoundly brilliant script,” she explained to the Advocate, an LGBT magazine. “I don’t take jobs to alter public perception about myself, which seems to me a high road to nothing — and rather unattractively self-involved. I’m interested in doing work that’s well written, fascinating, and true, and that Ellen episode was one of the best pieces of satirical writing I’d ever read. I love how it played with the idea that being a lesbian was perfectly normal, so I was more concerned with people finding out that I’d lied about my nationality.”

Thompson has been married to Greg Wise since 2003, and was married to actor Kenneth Branagh from 1989 to 1995, but rumors of her sexuality have been around her entire career. The actress said she has always felt connected to the community, “perhaps because I’ve always felt like an outsider,” she said. “I believe that actors and anyone in the arts should be outsiders, so that we can say whatever we want and hold a mirror up, as Shakespeare says, to what’s really going on in the world. We shouldn’t be within the pale of polite society. It’s a disaster that actors have become so respectable.”

On that note, Thompson decided to open up about her celebrity women crushes, and admitted that there is an actress who may have a crush on her.

“After full-on snogging Meryl Streep in Angels in America, where do you go from there? We practically had sex, for God’s sake,” she said jokingly. “Oh, there are so many beautiful women… Well, I met Sandy Bullock at an awards thing a couple years ago, and she said to me, “If I were gay, you’d be the one.’ I said, ‘I’m there!'”

You can see Thompson next in Effie Gray, expected out this year. Saving Mr. Banks is in theaters now.